The 2020 Election is not just another election. Joe Biden is right when he describes it as a fight “for the soul of America”; and if he has his way, then America’s soul will be sold. All true Bible believers should know exactly who the buyer will be. I’ll give you a hint, his name starts with an “S” and ends with “ATAN.”

I’m not saying that Biden is inherently evil, or that he is personally a bad guy. I’m saying that his Party and their vision for this once-God-fearing nation IS EVIL, and will send the USA to Hell in a handbasket. Sadly, according to recent surveys and polls, most Americans will be just fine with that.

A Pew Research Center survey that was just released found that most Americans did not draw closer to God during the heart of the Coronavirus pandemic. Over 10,000 random Americans were asked how they coped with the stress and uncertainty of the pandemic, and their responses were shocking and extremely disappointing to say the least.

Meanwhile, 90% said they spent the lockdown watching TV or movies, 70% talked on the phone or chatted through videoconferencing, and 64% exercised. So, a majority of Americans – in the heart of a deadly pandemic – used their free time doing worldly activities instead of getting right with their Maker.

I truly believed in my heart, with our Godless society being completely shut down (specifically bars, strip clubs, and casinos), that Americans would grow more spiritual and less worldly – through spending more time with family, and having more than enough time to reflect on the sins of their lives. Sadly, the citizens of this nation proved me wrong.

Instead of focusing on the two things that should be most important in life: family and relationship with God, most of my fellow Americans clutched the remnants of their worldly life to keep the world that God was judging as close as they possibly could. 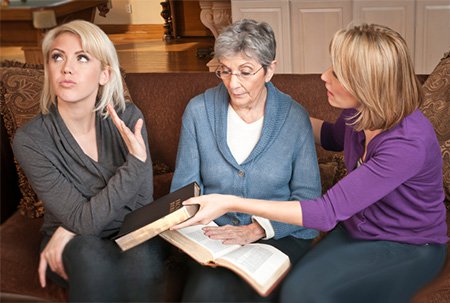 While I normally take polls with a grain of salt, especially when only a fraction of random Americans are surveyed, the recent 2020 Election polls appear to back up this survey.

I couldn’t understand, in 2008, how a majority of this Judeo-Christian Nation could vote for Barack Hussein Obama. I tried to reason that it was because they were deceived by his many lies and by the lamestream media. Then, when he was re-elected in 2012, I began to realize that it had to do with more than just being deceived. People were actually supporting his Godless stances on the issues. What was happening to our historically God-fearing country?

I thought that there was no way that Donald Trump could ever win the 2016 Election, and that this nation would continue to degenerate under a Clinton Presidency, so I was pleasantly surprised when he won and Republicans took the Senate. While Trump isn’t perfect, by any means, he has been far better for our nation than Hillary and the Dems running things would have been. I would also argue that he has gotten much better over time, and that is why I am comfortable in not only voting for him this time around but in strongly endorsing him for reelection.

Sadly, though he has been cleaning up the abominable mess that Obama made of our country for eight long years, the American people seem to want Obama’s Godless policies back in the White House. I say that, because virtually every poll released the past few months has Joe Biden leading Trump handily.

Biden has made clear that his administration would be Obama 2.0. Bible believers like myself and the Israelis see that as a return to Hell on Earth. I had never felt more threatened by my government, and never felt my belief system and code of morality attacked more, than under Obama’s Biblically-hostile reign. And, if the polls are truly accurate today, a majority of Americans actually want to RETURN to that?! Forgive my harsh language, but what the hell is wrong with you people?!

God forgive you if you’re a Christian or Jew who thought that America under the former president was anything but a nation deserving of God’s wrath and judgment. The Obama administration was the most Godless Presidential administration in the history of this country hands down. If you don’t agree, then you are not reading the same Bible that I am. Obama made clear that he was out to radically transform America, and that is exactly what he did.

During his tenure, the USA devolved into a cesspool of Biblically-hostile attitudes and beliefs. The false religion of Islam was celebrated, while Christianity was targeted as “hateful” and “bigoted.” Israel was treated like an enemy, as opposed to our greatest Ally. Schools forced the Godless theories of evolution, the Big Bang, and climate change on America’s youth. Our culture was flooded with widespread blasphemy, violence, pornography, legalization of mind-altering drugs, and LGBT propaganda. When you add the cowardly backslidden modern Church to the mix, we had a recipe for disaster.

God forgive the pastors who sacrificed truth throughout the past decade in order to fill more butts in their pews. You are all partly to blame for Obama dragging this nation so far away from the God of the Book you claim to live by and preach! Shame on you all.

Read my book, “The Signs of Our Times” for the many examples of why Barack Obama was the closest thing to the Antichrist that America has ever seen. While Biden isn’t nearly as bad as Obama, the modern Democrat Party stands for just about everything that the Antichrist will.

To all of you so-called Christians who are beholden to the Democrat Party (for whatever reason): you need to truly start reading your Bibles, instead of the New York Times or watching CNN and MSNBC. If you read the Holy Book you all claim to believe, instead of just cherry-picking a few verses here and there that define your “Christian walk,” then you would see that everything I say about today’s Democrat Party is Biblical truth. You can’t deny it.

God is for certain things in our Bible, and He is against certain things. And a majority of the things that He says He’s against, the Democrats are FOR.

Whether it be the worship of foreign gods in the land – pushing Him and His Word out of the public square to “not offend” unbelievers – taking down Ten Commandments monuments – advocating for and funding abortion (which is defined Biblically as “murder”) – endorsing Transgenderism or LGBTQ lifestyles and marriage (which He condemns as unnatural and harmful) – propping up anti-Semites (Ilhan Omar, Rashida Tlaib, Keith Ellison, Linda Sarsour, etc.) – being anti-Israel (whom God loves) while siding with their enemies – trying to force Israel to give up some of their God-given Land to their terrorist neighbors who have no Biblical claim to any of the Holy Land – fighting to keep the Bible, prayer, and everything having to do with our God out of schools – persecuting and even imprisoning Bible believers who won’t participate in same-sex marriages – and the list of abominable actions of the Democrat Party goes on and on and on.

While the Republicans and Trump are not perfect, they are far better at upholding and defending God’s Laws in our Bible. The Dems are all about doing away with the Law of the LORD, and replacing His Laws with the laws of MEN.

Yet, the polls today virtually all show that the Dems may not only win the Presidency in November, but possibly even the Senate. God help us. Wake up America. 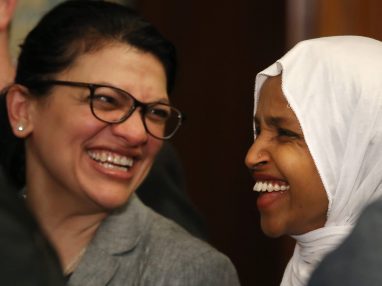 Most of the Democrat politicians today are anti-God and are servants of Satan. Like it or not. It is just the way it is. Just search “Democrat” on this website, and every article you read will back up my opinions on them.

In just the past few weeks, the left-wing protesters (whom Democrats publicly voice support for) have not only rioted in the streets – vandalizing, destroying, and burning property – but they have burned churches, beheaded statues of Jesus our Lord, and have even BURNED Bibles in the streets of Portland. So, the same Party who says you can’t fellowship at your churches because of Coronavirus, is just fine with you doing all of these demonic things in large unruly protests.

If you call yourself a Christian or Jew and don’t have any concern whatsoever about the things I’ve written about today, then you need to reexamine your Faith.

Either you are for God or you are against Him. Period. And while Donald Trump may be an imperfect sinner (like all of us), who is often brash, loud, and sometimes even “unpresidential,” he has made clear that he is FOR GOD. That is all that I need to know. That is why He has my vote. This November, I pray to God that he has yours too. If not, vote for Kanye West. Anyone but the Dems!

If Joe Biden and his radical Party retake control of this country, with their anti-God platform, then judgments even worse than Coronavirus are going to befall this nation.

If the Socialists, Communists, Marxists, Leftists, Atheists, and Islamists of the Democrat Party are given the reins of the USA, then America is DOOMED.

If you want a country that is still around for your kids to grow up in, then return to your God America. He’s our only hope. Get in His Word. Repent of your sins. Live by His Laws and not the laws of sinful men. Do not follow the masses in doing evil any longer. Return to the LORD! 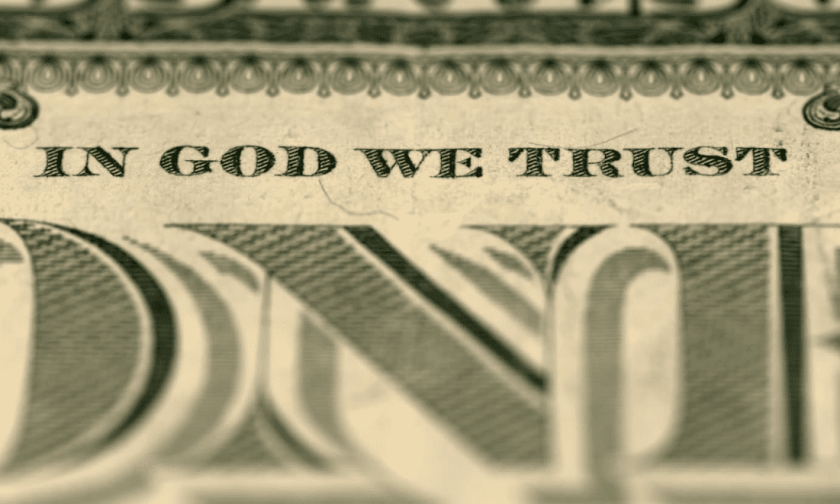 “Now The Holy Spirit speaks expressly, that in the Latter Days some shall depart from the Faith, giving heed to seducing spirits, and doctrines of demons.” – 1st Timothy 4:1-2

“You adulterers and adulteresses, know you not that the friendship of the world is enmity with God? Whosoever therefore will be a friend of the world is the enemy of God.” – James 4:4

“Be not conformed to this world: but be you transformed by the renewing of your mind, that you may prove what is that good, and acceptable, and perfect, will of God.” – Romans 12:2

“Come out from among them, and be you separate, saith The Lord, and touch not the unclean thing; and I will receive you.” – 2nd Corinthians 6:17

“All the nations that forget God shall be turned into HELL.” – Psalm 9:17