The Signs in the Heavens just keep on coming. First, we witnessed the historic “4 Blood Moons” on Biblical Feast Days in 2014-15. Then, we saw the “Supermoon of the Century”, the largest moon since Israel’s rebirth in 1948, in the important Hebrew year 5777. Last year, we experienced the “Once-In-A-Century Total Solar Eclipse”. Now, for the first time since March of 1866, an extremely rare “Blue Super Blood Moon” appears in the heavens on January 31st. If you can’t recognize the signs of the times, then you’re not paying attention.

So, what exactly is this rare trifecta event in the heavens that everyone is talking about? It will be a combination of a Blue Moon, a Supermoon, and a Blood Moon (Total Lunar Eclipse). Sounds like an event straight out of the Book of Revelation. While it may not be mentioned in the Book of “Last Days” Prophecy, aspects of this event ARE alluded to in our Holy Bible and point to CHRIST’S RETURN.

I personally believe this is another rare event signalling the coming Rapture of the faithful before the 7 Year Tribulation begins on earth. A Blood Moon is prophesied to announce the return of our Lord Jesus to earth, and a Supermoon is prophesied to rise in the season of God bringing Jews and Christians together into one fold (Isaiah 30:26). Does the fact that we are getting both in one night, combined with a blue moon, mean that these prophecies are nearing fulfillment? I’d be lying if I didn’t say YES.

I’m sure you have all heard and used the expression “Once in a blue moon”, but also have no idea what one truly is. For starters, it isn’t “blue”. The Blue Moon occurs about every 2½ years, and is a term used to describe the 2nd full moon in a single calendar month. January’s first full moon occurred on January 1st. So, the blue moon in itself is not too rare, but combined with a blood moon it is. Plus, being a supermoon, it becomes “extremely rare”.

It will be the first Blue Super Blood Moon in nearly 2 Centuries! While this is the first “Blue Moon” I’ve written about, I have written extensively on Blood Moons and Supermoons. A Blood Moon refers to a Lunar Eclipse, when the moon is bathed in a “blood red” glow. The Sun, Earth, and Moon line up so perfectly that Earth’s shadow blocks out the Sun.

The Moon turns red during the full eclipse, which is an effect of some sunlight passing through Earth’s atmosphere getting scattered and bent. A Supermoon occurs when the full moon is at the closest point of its orbit to the Earth, which is also called “the perigee”. This makes the Moon appear much larger and closer to the Earth – up to 14% bigger and 30% brighter than your average full moon.

The total eclipse of the Blue Super Blood Moon will be visible early in the morning of January 31st from western North America across the Pacific to eastern Asia, NASA says. The United States will miss out on the full spectacle as the Eclipse occurs too close to the setting of the Moon. In the U.S., the best view of the Eclipse will be along the West Coast. Only a partial Eclipse will be visible in the central and eastern U.S., since the Moon will set before “totality”.

Our generation has seen more signs in the heavens than quite possibly any other generation since Christ Jesus ascended into Heaven around 1,985 years ago. The LORD is certainly trying to get the world’s attention. Could all of these celestial signs be pointing to our Lord coming BACK down? With so many other latter day signs all around us, any Holy Bible believer who answers no to that question is being willfully IGNORANT. God’s Word tells us that “He appointed the Moon for SEASONS” (Psalm 104:19).

A “season” in the Holy Bible doesn’t always mean Spring, Summer, Fall, or Winter. A Biblical season can refer to an appointed time for mercy, grace, reaping, judgment, or prophecy fulfillment. Given all of the recent signs in the Moon, I believe we are in a season of something truly historic. Lord Jesus told His disciples that “signs in the Sun and Moon” would signal His return, and if all of the extremely rare occurrences that we’ve witnessed in recent years aren’t “SIGNS” then I don’t know what are. Marana tha Yeshua! 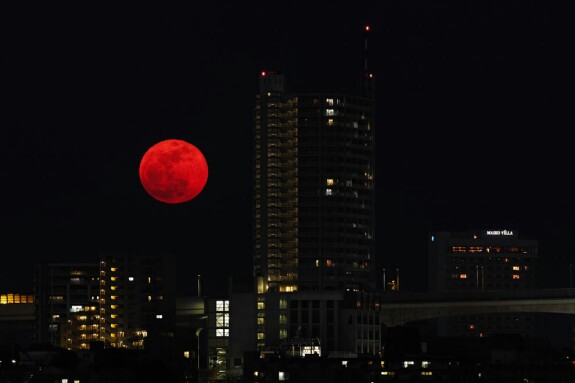 “JESUS said, There shall be SIGNS in the Sun, and in the MOON, and in the stars.. and THEN shall they SEE ME COMING in a cloud with Power and great Glory.” ~ Luke 21:25-27

“The light of the Moon shall be AS the light of the Sun.. in the day that The LORD binds up the breach of HIS people, and HEALS the stroke of their wound.” ~ Isaiah 30:26

“The Sun shall be turned into darkness, and the Moon into BLOOD, before the great and the terrible Day of The LORD come.” ~ Joel 2:31 & Acts 2:20