“Jesus said, because lawlessness will be increased, the love of many will grow cold.” – Matthew 24:12

In this coming Election, it is not Trump vs. Biden, Republican vs. Democrat, or Conservative vs. Liberal. It is good vs. evil, right vs. wrong, righteous vs. wicked, Godly vs. unGodly, truth vs. lies, sanity vs. insanity, safety vs. anarchy, peace vs. war, and civility vs. unruly disorder. There is no in the middle. You must choose one side or the other. God will not hold those guiltless who vote in favor of the lawlessness that we are witnessing in streets all across this nation.

If you don’t like Trump, vote for Kanye or stay home. President Trump was spot on when he said at a rally earlier this year, “whether you like me or hate me, you have NO CHOICE but to vote for me.” He said to look at the other side. He said you can’t vote for that. He is absolutely right. Any Christian, God-fearing Jew, or anyone with any semblance of morality in their mind, cannot possibly give the immoral Democrats the White House – nor any more power in Congress. What power they have over this country needs to be taken away, otherwise the America that we grew up in will be unrecognizable. No one who believes in the God of this country can allow that.

The images you see on your television of innocent Americans being accosted by left-wing mobs, Bibles being burned in the streets, statues of the Lord Jesus Christ being beheaded, stores being looted, property being vandalized, buildings and cars being burned, and anyone who doesn’t support their cause being assaulted and even killed, is all being orchestrated and supported by ONE political party – the Democrats.

Why? Because a majority of them do not believe the Holy Bible, and many do not believe in God or they believe in false gods like Allah of Islam. That is how they can so easily justify everything that we Christians know darn well to be wrong. They have long been calling evil “good” and good “evil,” just as the prophet Isaiah said they would in the Last Days.

All of the lawlessness in the streets of our major cities is paving the way for the Antichrist, whom Saint Paul referred to as the “lawless one” (2nd Thessalonians 2:3). And everyone you see rioting in America today will pledge their allegiance to him (if they haven’t already in their hearts). No matter what cause so-called “peaceful protesters” are fighting for, the way they have gone about it is all wrong. There is never an excuse for violence and assaulting strangers that don’t share your views. And so Bible believers have absolutely no excuse for supporting them. Read 2nd Corinthians 6:14 –

“Do not be unequally yoked with unbelievers. For what partnership has righteousness with lawlessness? Or what fellowship has light with darkness?”

Paul is telling Christians to not befriend or ally with the type of people making up the mobs we see in the streets today. By voting for the Democrats in 2020, you are “partnering” with the mobs and allying with them. You may be some “peace and love” hippie, who doesn’t like to choose sides, but as a believer you must. God wouldn’t have it any other way. Jesus said that until He returns as the “Prince of Peace,” His Name and His teachings would only “divide.”

There’s no in the middle with the LORD. There’s no on the fence. You are either with Him, believe and uphold His Word over all else, or you are against Him and rebel against God’s Word in favor of the trendy opinions of sinful human beings. Which side are you on? I will forever be on the side of God, no matter which way the spiritual and political winds of our society blow.

And right now, in cities like Portland, Oregon – Kenosha, Wisconsin – Minneapolis and St. Louis, Minnesota – Seattle, Washington – Chicago, Illinois – Washington, DC – as well as major cities in California and New York, the winds are blowing dangerously far-left and far away from God. What do all of these cities have in common? They are all DEMOCRAT-RUN cities. Thus, the violent protests are allowed to fester until they get out of control and devolve into lawless rioting and chaos.

Whether you like the party or not, one thing’s for sure, you do not see this in Republican-run cities. They shut things down quickly once rioting, looting, violence, and destruction begin, There can be no doubt that in 2020, as I said to open this article, one political party represents law and order and the other represents lawlessness. One party represents light, and the other darkness. Which America do YOU want to live in? Which party would you feel safe raising your children under? 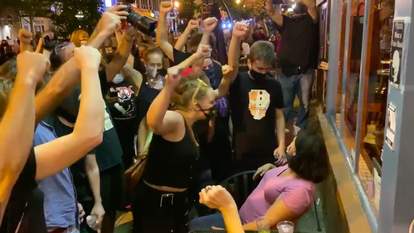 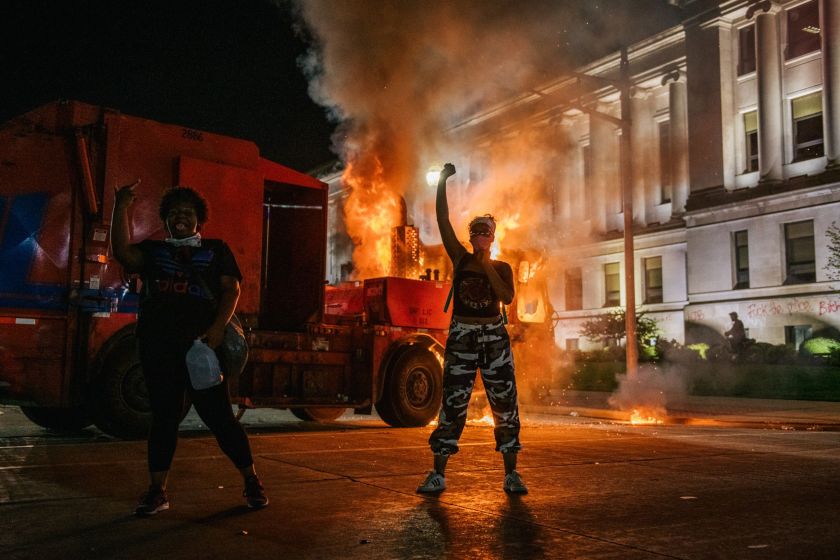 Joe Biden recently said that, if elected President this November, he would be an “ally of the light – not the darkness.” He said that he and his party would “draw out the best of us – not the worst.” His words are completely antithetical to reality. His party supports and does nothing to end the violent protests, unruly looting, and cold-blooded murders of innocent Americans by riotous left-wing thugs. His party has brought out the absolute worst animalistic tendencies in human beings. His running mate, Kamala Harris, is on record saying she fully supports the protests and riots, saying they “will and SHOULD continue.” These 2020 candidates, and their party, are enemies of “the Light” and allies of the demonic “darkness” we see enveloping America’s streets.

Innocent business owners, right-wing politicians or Trump supporters, police, and pretty much any one who is white, are confronted by the riotous mobs, harassed, assaulted, beaten to the point of hospitalization, or even murdered in cold blood. And, yet, the Democrats stand with these “protesters” and their “just cause.” You cannot bring about justice with injustice, and you cannot protest crimes while committing them yourself. That is the epitome of hypocrisy. They are even calling to “defund the police,” to pander to the radical Black Lives Matter and Antifa groups. They are breeding chaos and anarchy. They are breeding violence and murder.

I have seen so many disgusting videos of these loser protesters attacking passerbys who won’t bow to their agenda. If you don’t take a knee, repeat a slogan, or raise a fist to show your solidarity with them, they beat you down like a pack of wolves. These people are possessed by demons. There is no other explanation. We believers can never surrender to the mob. No matter how many they have with them, the ONE who is with us is far greater and more powerful than a million of them will ever be.

I, for one, will never kneel for them – only to my Lord Jesus Christ. I will never affirm nor profess what they ask – only affirm and profess that “GOD IS GOOD.” I will never raise a fist in solidarity with a radical violent mob – only raise my hands to Heaven in prayer and praise. My message to #BlackLivesMatter, and their Satanic “No Justice – No Peace” slogan, has always been “kNOw JESUS – kNOw PEACE.” And when you know my Lord, there is no way you could ever stand with them or the political party that endorses their riotous behavior.

So, if you call yourself a follower of Jesus Christ, start acting like it. He is the Light. In Him, there is no darkness. We must disassociate from all those dwelling in the darkness and who refuse to come to the Light. Y’all can knee to BLM or men all that your heart desires; but as for me, I kneel to only ONE. And whether the riotous protesters and demonic Democrat party like it or not, they will have to do the same someday –

“At the name of Jesus EVERY knee should bow, of things in heaven, and things in earth, and things under the earth.” – Philippians 2:10

If, God forbid, Joe Biden and the Democrats win this November, I suggest you all heed the words of our Lord in Luke 22:36 –

A modern sword is a gun. I’m not advocating for anyone to buy a gun to go shoot up your political enemies. Not at all. That’s just as Satanic as those I’m speaking out against. I’m saying that everyone who has a family that they love and want to protect, buy a gun. Lord willing, you will never have to use it. But if these riotous mobs come to your city in the near future, will you be prepared to defend yourself? I will. I pray that you all will too. In the meantime, get out and vote on November 3rd for Trump/Pence and vote RED up and down the ballot… OR ELSE.

“Whoso keeps the law is a wise son: but he that is a companion of RIOTOUS men shames his father.” – Proverbs 28:7

“If any be blameless.. have faithful children not accused of RIOT or unruly.” – Titus 1:6

“Jesus said, As the days of Noah were, so shall also the days of My Coming BE… (In Noah’s Days) The earth was corrupt before God, and the earth was filled with VIOLENCE.” – Matthew 24:37 & Genesis 6:11