Once again, the “father of lies” is working through the powers that be in Hollywood to radically transform another classic, in order to pollute the already confused minds of Generation Z. It was just announced that a male actor, Billy Porter, will play the role of the “Fairy Godmother” in the 2021 remake of Cinderella. God help us.

No wonder Gen-Z is the “least Christian generation in history”!

In my first book, “The Signs of Our Times,” I wrote an entire chapter on just how far from God today’s younger generation has been pulled. Only 4% of Gen-Z holds a Biblical worldview. 4 percent! This means that 96% of them are currently headed to Hell in a handbasket.

How does that make you Christian and Jewish parents feel? I think it’s about time that you all start monitoring what your kids are watching and listening to in this world, because if it is not even safe to watch Disney content anymore then there is great reason to worry.

Porter and Hollywood know that most parents today are either blind to the indoctrination that is going on with the kids, or that they have surrendered and accepted it as the “new normal.” Thank God that some Christian parents are fighting this garbage, but they are few. The actor acknowledged the God-fearing parents in a statement about the new film.

He said, “I think the new generation is really ready. The kids are ready. It’s the grownups that are slowing stuff down.”

Wow. THE KIDS ARE READY, he said, but it’s the GROWNUPS who are slowing stuff down. He admits that if it wasn’t for those pesky God-fearing ADULTS, the LGBT Mafia would have indoctrinated every kid in this country by now.

Any Bible-believer today can recognize that Satan is using Hollywood to rob, kill, and destroy Generation Z. Sadly, as I wrote in my second book, “Even More Signs of Our Times,” he appears to be succeeding.

As you noticed in the title of this article and in the opening sentence, I used the words “Another” and “Once again.” This is because it is not the first time that Disney has allowed its once wholesome family classics to be transformed in order to reshape the thinking of this current young generation.

They have allied with powerful LGBT groups to make their films and programs more “inclusive.” This has led to same-sex kisses and relationships in cartoons and preteen-themed tv series, as well as lead characters in Disney classics being reimagined as homosexuals – such as in 2017’s remake of “Beauty and the Beast” or this new version of “Cinderella” being made by Sony.

Honestly, how can they be using “genderless” and “GodMOTHER” in the same breath? That has got to be one of the biggest oxymorons in the world. I guess it should be no surprise though. After all, there are nothing but morons running the Mainstream Media in this country and world today.

While society is telling you to encourage your children to make their own “identity” today, I argue the Biblical truth that Almighty God has already given them one at birth.

The Book of Proverbs, Chapter 22 and verse 6, commands you to “Train up a child in the way they should go, and when they are old, they will not depart from it.”

You Christian and Jewish parents need to be more active in the lives of your children than ever before. Because if you are not raising them, then you can be sure that someone else will – and the LGBT Mafia is more than happy to do that for you. 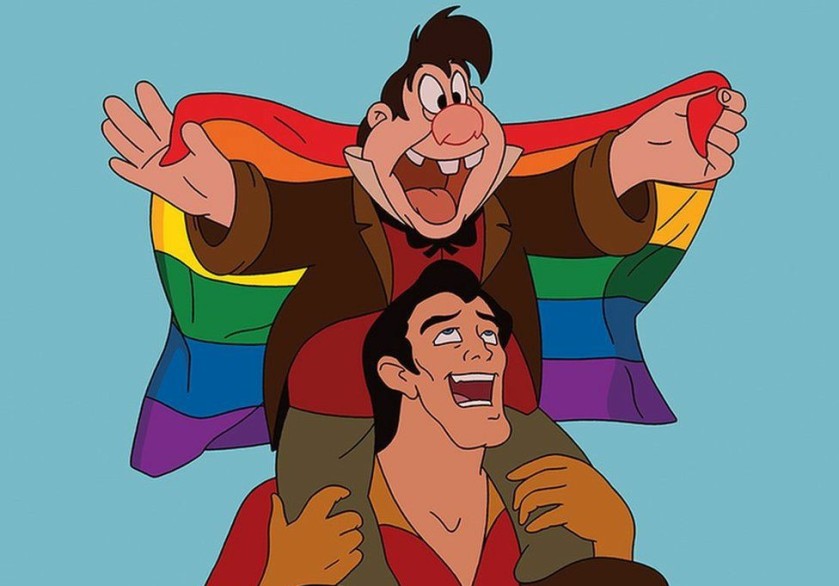 “God created man in His own image, in the image of God He created him; MALE AND FEMALE He created them.” – Genesis 1:27

“The woman shall NOT WEAR that which pertains unto a man, neither shall a man put on a woman’s garment: for all that do so are ABOMINATION unto The LORD your God.” – Deuteronomy 22:5

“All the nations that FORGET GOD shall be turned into HELL.” – Psalm 9:17

“They changed the truth of God into a LIE, and worshipped and served the creature more than the Creator, who is blessed for ever. Amen. For this cause God gave them up unto VILE affections: for even their women did change the natural use into that which is against nature: And likewise also the men, leaving the natural use of the woman, burned in their lust one toward another; men with men working that which is unseemly, and receiving in themselves that recompence of their error which was meet. And even as they did not like to retain God in their knowledge, God gave them over to a REPROBATE MIND, to do those things which are not convenient.” – Romans 1:25-28