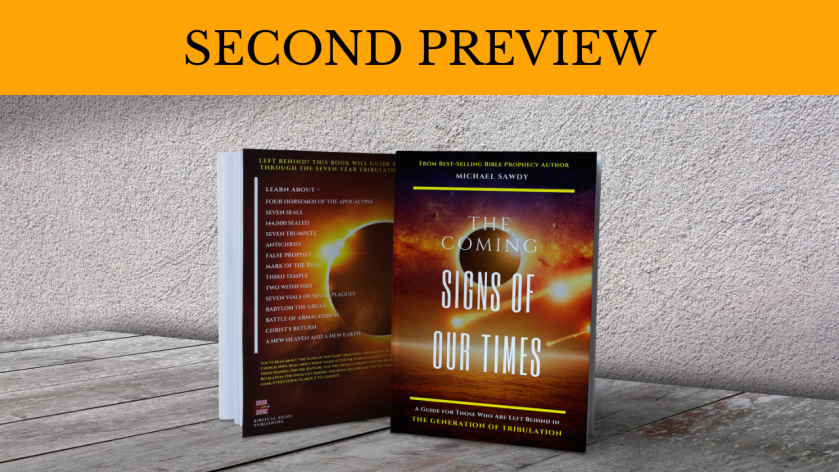 In under 3 weeks, the third book in the Signs of Our Times series will finally arrive! Last week, I rolled out the first preview of the book, and this will be the second of four exclusive sneak peeks.

As I said last week, the first 2 books in the series have been all about the signs that are heralding the Rapture of the Church in our generation. This coming book will be all about what comes AFTER the world-changing event – specifically, the 7-year Tribulation.

The Holy Spirit led me to write it as a guide for all those who are left behind, that they may understand what follows the Rapture and hopefully turn to the Lord during the seven-year period of hell on earth.

The main player in that period is, of course, the Antichrist. There are many today who claim to know who the Antichrist is, or who say that it could be Donald Trump, Hillary Clinton, or other international political leaders. The truth is, even if the Antichrist is alive and well today (which I believe that he is), none of us can know for sure who he is. His identity will only be revealed to those who are left behind.

I wrote extensively about what they would need to look for in the coming Godless world dictator in the book. I examined every prophecy concerning him in the Old and New Testaments, and compiled one of the most thorough and detailed studies about the Antichrist that you will find in any book on Bible Prophecy. This week’s preview will be a few pages from that chapter…

“Woe to the inhabiters of the earth and of the sea! for the devil is come down unto you, having great wrath, because he knoweth that he hath but a short time.” – REVELATION 12:12

There are many key events and players that make up the final 3 ½ years, during which time Lord Jesus said that “there shall be Great Tribulation, such as was not since the beginning of the world” (Matthew 24:21). The Antichrist seizing global power and rule, alongside the False Prophet, will occur at the same exact time that the Two Witnesses appear on the scene in Jerusalem. Since these holy prophets of God will be an irritating thorn in the side of Antichrist, it only makes sense to examine him first.

At this point in his political career, the Antichrist is going to be incarnated by Satan himself. His true colors are finally going to show for the entire world to see. Sadly, since much of the world will be so lost and far detached from the LORD, they will have no problem with who he is about to become. Before I go any further describing the beast that he is becoming, I want to take you through his career up to this midway point of the Tribulation.

He is first revealed to the world after the Rapture of Christ’s Church, and not anytime before. This is because the restrainer of the pure evil that Antichrist will embody must be “taken out of the way” (removed). That would be the Holy Spirit. The Spirit indwells believers on the earth. So when you remove us (living temples of the Holy Spirit) from the scene, the influence of God’s Spirit is virtually removed from the world.

If He remained gone, then no one on Earth would ever be saved again. Every human being would be destined for Hell. That is exactly why God, in His great mercy, sends the 144,000 Jewish evangelists and the coming Two Witnesses – to bring His Spirit’s influence back to the earth. That is the reason why you who are left behind are reading this book in the first place. If the Holy Spirit wasn’t working on your soul, you would have trashed this book and anything having to do with the God of the Holy Bible. You didn’t. You haven’t. Thank His Spirit for that!

Immediately after the Rapture, there will be a great radio silence, so to speak, of the Spirit. He will have no one to speak or preach through. This lack of a universal moral compass in the world is what opens the door for the entrance of Antichrist. The historic event of the Harpazo (which is Greek for “the Rapture”) results in the sudden and mysterious disappearance of millions (if not billions) of Christians globally. This will cause widespread panic around the world; thus creating the perfect atmosphere for this charismatic leader to finally rise to power.

I explained in the “4 Horsemen of the Apocalypse” chapter that he enters the world scene as a “man of peace,” and does what was long thought to be impossible – he succeeds in brokering peace between Israel and her hostile Muslim neighbors. Since the mid-1970s, world leaders (specifically American Presidents) have tried extremely hard and have all failed at achieving this goal. The number one reason for their failure has been because the Islamic nations surrounding Israel have never wanted peace with the Jewish State, but have wanted Israel gone. That is why the citizens of the world (and even the Israelis themselves) are going to heap praise upon this man, because he will finally deliver what no one else in history ever could – real peace.

“And he shall confirm the covenant with many (Israel and the Muslim nations of the Middle East) for one week (7 years): and in the midst of the week (3 ½ years in) he shall cause the sacrifice and the oblation (of the Israeli Jews in their Temple) to cease, and for the overspreading of abominations (declaring himself to be God in the Temple, and setting up his image in the Holy of Holies) he shall make it desolate.” – Daniel 9:27

As the verse above lays out in detail, it will not be a lasting peace. The Antichrist himself will be the one who breaks the covenant and turns the whole world against Israel. That was the devil’s goal all along, and that is why he propped this false messiah up in the first place. Satan has always hated the Jews, and especially the Jewish State. He will lure them into a false sense of peace and security and then he will pounce upon them like the vicious roaring lion that he is, and attempt to tear them to pieces.

When the Antichrist first arrives in the world of politics as the smooth-talking visionary with all of the answers, it will not just be Israel who will admire him for bringing peace. It will be virtually the entire world. I think that he will come around after the Gog-Magog War, which most likely will precede the Rapture. Since Israel’s enemies will be demoralized after failing to wipe the Jewish State off the map, and Israel will surely have war fatigue, I believe that the political atmosphere will be ripe for him to swoop in and broker the covenant of peace.

For those not familiar with the Gog-Magog battle that I mentioned, I write extensively about the war in my previous two books. So, take a few moments to read them if you have not already. Now, while the beast deceptively enters the Tribulation Period as a “peacemaker,” most of his Biblical titles reveal his true nature –

– The Beast (Book of Revelation)

He has some other titles, which are primarily found in the Book of Daniel. The Old Testament prophet gives the most detailed description of this wicked world dictator, which is even more thorough than the Book of Revelation’s account. So I want to examine the visions of Daniel concerning this man that we call the Antichrist. In Chapters 7 and 8 of the Book of Daniel, the prophet refers to him by the name of the “Little Horn.”

Daniel was given a vision by the LORD of the final world empire on the earth. Like the Book of Revelation, Daniel uses the word “beast” to describe the One-World-Government (Daniel 7:23). The beast has ten horns (which represent 10 kings), and another horn that rises up after them (the “little horn”) which will subdue three of the kings. This final horn represents Antichrist.

There are a dozen more pages of this chapter about the coming wicked world leader, but that will do it for the preview. If you want to read much more about him, or want your loved ones to know everything that there is to know about who he will be and what he will do so that they are not deceived to follow after him, then be sure to grab the book on DECEMBER 7TH!

Follow the countdown to the new book with the ticker on the main page of this website, and also on Biblical Signs social media accounts. Stay tuned for more previews in the next 2 weeks leading up to the release! Thanks as always for the continued interest and support.