Over the course of the past week, there were 4 mass shootings that made headlines in the United States. The first attack came at a festival in Northern California on July 29th, the second at a Mississippi Walmart, the third at another Walmart store in Texas, and the most recent coming last night in an Ohio entertainment district. Altogether the attacks left around 35 dead and more than 50 wounded.

As always, the Democrats and liberals screamed about “gun control” on social media. As I have said after every mass shooting in recent memory, there is no legislation – no amount of gun confiscation – and no psychiatric help for mentally-ill individuals – that will prevent the tragic events in the future. Until this nation returns to our Maker and our Lord, the shootings will continue and most likely get worse.

Wherever there is an absence of God, evil will always fill the void. I wrote an entire chapter on mass shootings, which have been plaguing our nation for nearly 2 decades, in my new book “Even More Signs of Our Times.” Given the recent uptick in the demonic attacks, I felt that it was a good time to share a few pages from that chapter…

Political points of view are all that we ever seem to hear in debates and discussions about mass shootings. Very rarely do we hear a Biblical perspective. I intend to change that.

If you are a Democrat, you probably think that mass shootings have increased under President Donald Trump and that the solution is gun control. If you’re a Republican, you most likely believe that the tragic events began to increase under former President Barack Obama and that more guns are the answer – not less. You are both wrong.

Mass shootings in America actually became more frequent and more deadly over time, starting in 1999. I think it is very interesting that the year includes 6-6-6 upside down. That just so happened to be the year of the infamous Columbine High School shooting. The perpetrators of that attack on a Colorado school were two atheist students, who were inspired by Adolf Hitler.

The depraved teens murdered 12 of their fellow students and one teacher. A Faith-based film was made about the tragedy and centered on one of the victims, devout Christian Rachel Joy Scott. Masey Mclain portrays Scott in “I’m Not Ashamed.” If you have not yet seen the movie, then I highly recommend it as a must-see. The two demonic shooters carried out the attack on April 20th, which just so happened to be Hitler’s birthday.

Over the course of the next 2 decades, as the nation drifted further and further away from God, more demonically influenced youth followed in the footsteps of the Columbine shooters. In 2005, a 16-year-old murdered 7 in Red Lake, Minnesota. In 2007, a 23-year-old college student murdered 33 at Virginia Tech University. That was the deadliest school shooting in U.S. history.

In 2012, a 20-year-old shot up Sandy Hook Elementary School in Connecticut – murdering 26, with 20 of the victims being children who were only 6-7 years old. In 2014, a high school freshman murdered 4 fellow students in Marysville, Washington. In 2015, a community college student in Oregon murdered 8 students and one teacher.

In 2018, a 15-year-old student murdered 2 and injured 18 at his high school in Kentucky. Also in 2018, an expelled 19-year-old student went on a shooting spree at his former high school in Parkland, Florida – murdering 17. Just three months later, another black-hearted teen shot up Santa Fe High School in Texas. His cold-blooded attack left 10 dead.

It is no surprise that all of the young shooters have had one thing in common: anti-God influences. The Parkland shooter was anti-Semitic, tortured small animals, and testified that “demons spoke to him.” The Santa Fe shooter idolized the Columbine psychopaths, wearing a long black trench coat just like theirs. His social media accounts revealed that he too had a love for Hitler. His clothing was adorned with Nazi, Communist, Fascist, and Occult symbols. He attributed his “evil side” to the demon “Baphomet” in a social media post.

These demonic kids are the consequence of not teaching children the Biblical Laws of God regarding right and wrong, and it is no coincidence that the “least Christian generation” in U.S. history is the most violent. In my first book, I shared a study that revealed more teenagers than ever before identify as atheists and that only 4% of today’s youth hold a “Biblical worldview.” And, yet, people wonder why our schools have turned into war zones!

I guarantee that mass shootings in schools will continue, and will possibly even get worse. It won’t matter how many gun restriction laws are passed; because so long as the heart of the youth is evil, Satan will lead their hands to a weapon. There is only one solution that will ever work to end America’s school shootings epidemic, and that is to put Almighty God back in our schools – where He rightfully belongs.

Today, there are far too many Americans who are ignorant to the fact that America’s very first schoolbook was the Holy Bible. Ever since it was forced out (along with prayer), the school environment has rapidly become less safe – year after year. In a 1940 survey of public school teachers, the top disciplinary problems listed were: talking out of turn, chewing gum, running in the halls, dress-code violations, and littering.

Flash-forward to today, and look at what America’s downward spiral away from the LORD has done to our nation’s school system – the top problems that this generation’s teachers report are: drug and alcohol abuse, pregnancy, suicide, rape, robbery, assault, and shootings. Things are unquestionably worse in our schools than they’ve ever been in the history of this nation.

Examining history, we can see that only one thing has changed over the course of the past 200+ years. At the founding of America, did our forefathers own guns? How about in 1940? The answer is yes, on both counts. Did teenage boys have hormones back then, and desire sexual relations with girls? Again, the answer is yes. Did alcohol exist back then? Yup.

So, why then were there no mass shootings in schools? How come as many young teen girls weren’t getting pregnant? Why were boys back then not raping girls as much as today’s generation? Why was there no assault? Why no widespread alcohol use amongst the youth? What was so different throughout the first few centuries of the United States? The universal answer to all of the above is Fear of God.

Not only was the God of our Holy Bible revered above all, but children were taught Godly morals from a young age; and the Word of God was central to our nation’s education system. Teens back then could have never even imagined doing the abominable things that today’s youth do.

Yet, here we are… no God in schools, coupled with a generation inundated daily with lust – gratuitous violence – glorification of drugs and alcohol – immorality – blasphemy – even a bitter hostility toward the God of our fathers – and how can anyone be surprised by where we are as a society today? Just examine the history of mass shootings in America, and it is plain to see that once God is pushed out evil fills the void.

That is only about half of the chapter, so if you want to read more then go grab my book by clicking on the image below 👇 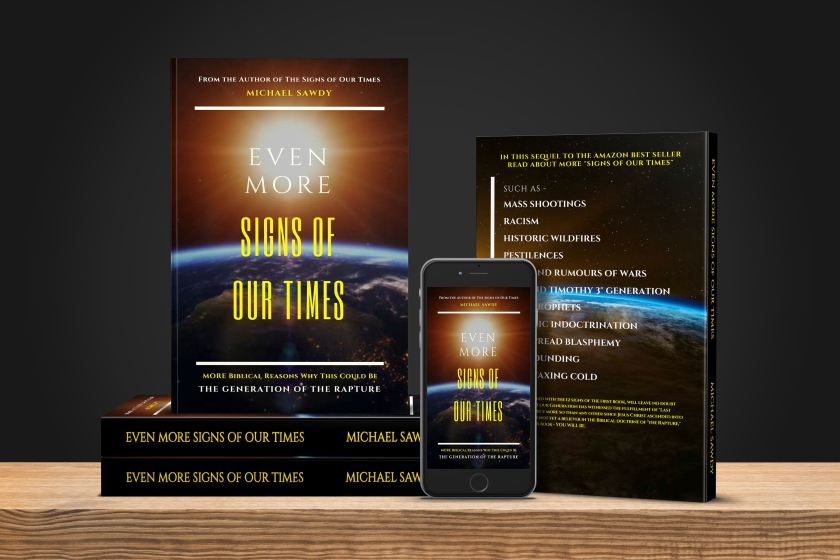 If America doesn’t have a much-needed “come to Jesus” moment, and soon, too many more of her citizens are going to lose their lives at the hands of evil.

“This know also, that in the last days perilous times shall come.” – 2nd TIMOTHY 3:1

“They did not like to retain God in their knowledge, so God gave them over to a reprobate mind, to do those things which are not convenient; Being filled with all unrighteousness.. wickedness.. maliciousness.. murder.. malignity…” – ROMANS 1:28-29