Liberal heads have been exploding all across America this month because of numerous Red States passing pro-life laws, in the hopes that – once challenged in court by Planned Parenthood and the ACLU – they will finally be able to have Roe V. Wade overturned by the increasingly conservative U.S. Supreme Court. Lord willing they are successful in their efforts!

Most of the “abortion ban” laws sweeping the nation are similar to Georgia’s “Heartbeat Bill.” The Bill, and those like it, make abortion illegal when the heartbeat of the baby in the mother’s womb can be detected. Sounds like a much-needed common sense law, doesn’t it? Who, in their right mind, could ever oppose preventing murder of humans with heartbeats?

A decade ago, absolutely no American would oppose that. In this wicked generation, which is so far removed from God, virtually the entire left-wing population of America are protesting the Heartbeat Bills. God help us. Also, every single Democrat running for President in 2020 had spoken out in fierce opposition to the Bills.

It is disgusting that a large number of my fellow citizens do not support protecting an innocent human life. It is my prayer that there are actually more God-fearing Americans in this nation than I have believed there to be, and that the extreme far-far-far-left position of the Democrat Party on abortion will lead to a Republican landslide in 2020.

If a majority of Americans actually elect any candidate from the party of infanticide as the next President, I shudder to think about just how severe the judgments of the LORD will be that befall this backslidden nation.

Not long after Governor Brian Kemp signed Georgia’s Bill into law, Alabama Republicans passed the most-restrictive law on abortion in the country. Under the Alabama law, any medical professional caught performing abortions will be given a sentence of up to 99 years in prison. HalleluYah! I’m pretty confident that caveat will cause the number of abortions in the State to plummet dramatically.

Besides Alabama and Georgia, five other States have passed laws restricting abortion, and at least seven more States are pushing anti-abortion legislation.

While pro-choicers were furious over the Georgia Bill, they absolutely lost their minds over this week’s new Alabama law. They were quick to bash “white Christian men” for “trying to control women’s lives and bodies,” and Twitter made sure to have all of the tired old pro-choice hashtags trending, such as #AbortionIsAWomansRight and #MyBodyMyChoice.

I wasted no time firing back tweets at the liberal masses who were attacking the laws that would protect the most vulnerable among us – the unborn. And of course, the hate and backlash that I received for doing so was fast and furious.

How dare I stand against murdering babies?!

How dare I stray from the masses and voice support for the laws that Planned Parenthood, the ACLU, Hollywood, and the liberal media elite are telling us are “evil” and that we have to oppose and protest?!

As always in the abortion debate, we are witnessing the fulfillment of Isaiah’s Biblical prophecy that “evil would be called good and good evil” (Isaiah 5:20). Never before in history have we ever seen this prophecy come to pass moreso than in our generation.

If you are a traditional conservative Christian, like myself, then you experience the “good called evil” prophecy playing out in your life every single day – because of our stances on abortion, gay marriage, Israel, transgenderism, and countless other hot-button issues of our day. One thing is for certain, and all believers can take heart in the fact, that the Holy Bible is on our side in these debates.

That is why the liberals are so loud, and why they attack us so vehemently, because they know we are on the right side of history and they don’t want to accept it. They would rather dig their feet in the sand alongside the majority in this nation, as opposed to joining the hated minority who stand on God’s Word of truth.

It is, without a doubt, a lot easier and much more comfortable for anyone to stand with the masses – even if that means you’re standing against God. It is, on the other hand, extremely foolish to stand against God – because you will be uncomfortable for eternity at the end of life’s road.

Sadly, there are too many people today who want to be loved and accepted by their peers of this current world, rather than be pleasing and obedient to the God of eternity.

This generation always brings Exodus 23:2 to my mind – “You shall not follow the masses in doing evil.” The masses in America are no doubt doing evil, promoting evil, and defending evil. Those of us who courageously stand against the masses are shunned, mocked, ridiculed, and hated with a passion. Don’t stop standing friends.

Remember, at the end of the day, God is standing on our side – rather, WE are standing on His side. So, DON’T MOVE. Stand you still and you will see the deliverance that the LORD will bring (Exodus 14:13). The other side may have more in their ranks, may be louder, may be more violent and threatening, and may even appear to be winning half of the time… but if the God Who made Heaven and earth is on our side, we cannot lose. Victory belongs to the LORD.

I would much rather stand ALONE with God, than ever stand with the whole world against Him. I hope you that you all feel the same.

As I said earlier, standing with (and for) God is the reason that I’m not shy in going against the grain and voicing support for what a majority of my peers on social media are opposing.

While the liberals were tweeting #AbortionIsAWomansRight, I said “NO. Women do not have the ‘right’ to murder anyone, in the womb or out of it. No one does. Murder is illegal. It always has been in Bible-based societies. Abortion is murder. If you murder, then you have the ‘right to remain silent.’”

When the ACLU tweeted that “Abortion is ‘NOT a crime’ but a ‘constitutional right’,” I responded – “Last time I checked, murder IS a crime in the USA and virtually all of the world. Abortion takes the lives of defenseless human beings. That is NOT and never will be a ‘constitutional right.’ I’d like to know what constitution y’all are reading!”

Then there were those who were condemning the Alabama Bill because it wouldn’t allow for abortions in the cases of rape and incest. I know that may be hard to understand and even seem like cruel punishment to the victim; but when you view the dilemma from a Biblical standpoint, you can see why abortion is wrong in EVERY INSTANCE.

In the Holy Bible, whenever a child was conceived through rape or incest, we see that God had always reaped out punishment for rapists or perpetrators of incest. They never went unpunished. But He NEVER punished the baby. He allowed the babies of those horrendous crimes to live their lives. We need to do the same. One victim of such tragedies should be enough.

Why would we make two victims?! That, my friends, is the real cruel punishment. The baby committed no crime, for it hasn’t even been born yet! I explained in my first book that there are over 2-million women, in the U.S. alone, who are looking to adopt because they cannot have children on their own. By having the baby, the victimized mother is blessing multiple lives in the process – instead of ruining two.

One Twitter user told me that “the Bible says we are alive as of our first breath.” You may also hear this argument by those on the left who never read their Bibles. I quickly responded to him, “NO. The Holy Bible does not say that. It says that God knows us BEFORE He even forms us in the womb.” –

“Before I formed you in the womb I knew you; and before you came forth out of the womb I sanctified you…” – Jeremiah 1:5

In my opinion, there should only ever be one exception for when abortion should be allowed – and that is to protect the life of the mother. If the delivery of the baby would result in her death, then (and only then) should she be given the choice to abort. There is no other good reason to ever take the life a human being in the womb. None.

I don’t care what anyone says, or how articulate they express their reasons why. Murder is murder, in the womb or out of it. Period. If you want to read more about my many Biblical pro-life arguments against abortion, be sure to read my book, “The Signs of Our Times.” I devoted an entire chapter to the issue.

It appears that there is about to be a civil war fought in this country over abortion, and I pray that you will all be standing alongside me, and alongside God – defending LIFE. 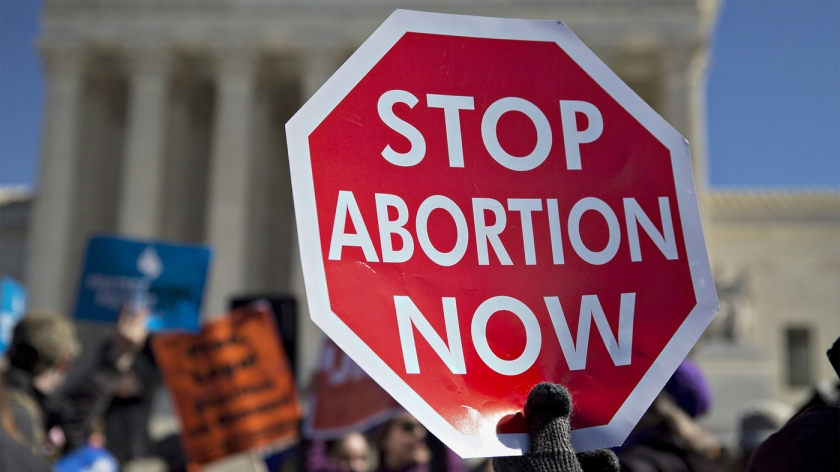