Democrat lawmakers in my home state of Michigan, and also in Texas, have made all-out war on Christians who adhere to God’s Law over the modern laws of man. And people wonder why I only vote Republican or don’t vote at all.

Yes, it is true that much of the Republican Party today has become more moderate – and is far from conservative enough for me to wholeheartedly support them all of the time. Still, like I said in the 2018 Election, we believers need to vote for the Republicans simply out of self-defense – for the sole reason of keeping antiChrist Dems, who would throw us into prison for our Biblical beliefs, out of positions of power.

In a day and age when so many of my fellow citizens have come to believe the Democrat lie that Republicans are the party of “hate, discrimination, and bigotry,” it is so obviously the other way around. While it certainly wasn’t always this way, the current Democrat party is openly hostile toward anyone in this nation that holds the Biblical worldview.

While they claim to be the party of “choice” and “inclusion,” they are threatening, targeting, and using their power to punish anyone who doesn’t believe what they want you to believe. They are beyond guilty of the exact same discrimination that they constantly accuse Christians and Republicans of committing.

Case in point, here in Michigan, it was just announced this week that the state government will no longer provide funding to Faith-based adoption agencies. Their reasoning is that Christian-run agencies “turn away LGBTQ parents due to religious objections.” Yes, it is absolutely true that Christians do not believe in Gay Marriage, and that we believe children should have what God intended every human being to have since the very beginning – a mother and a father.

It is what we have believed for thousands of years. It is no secret. The increasingly Biblically-hostile Dems don’t want us believing that, and so they are now using their power to defund all Christian adoption agencies if they don’t conform to the “new normal” in this country.

There are plenty of non-Christian adoption agencies out there that homosexuals can go to, who don’t hold to the Biblical worldview, but the Dems don’t care. They want to shut down any and all Americans that believe the Holy Bible over today’s liberal ideology. Whatever happened to the party of “choice, inclusion, and diversity”?

It seems the Dems are the ones who are the real bigots and haters in this nation today. In this situation, they may think that they are hurting the Christians; but the ones who they’re really hurting the most are the children, who will have a harder time being placed in loving homes because of the lack of necessary funding at the adoption agencies. Yes, the same Dems who say in front of the TV cameras how they care so much about the children! Hypocrites.

Newly-elected Attorney General, Democrat Dana Nessel, and lawyers for the liberal ACLU (American Civil Liberties Union), have said that Michigan’s Department of Health and Human Services is now required to “end contracts with agencies found to have discriminated against LGBTQ couples or individuals.”

If that weren’t bad enough, and a scary sign of the direction that my state is going in for believers like myself, earlier this year Nessel also called for an Orwellian “database for hate and bias” in Michigan. No joke. I wish that it was. The database that Nessel has proposed would put the state’s citizens into a database which would record incidents “that don’t rise to the level of a crime but are part of a group that espouses hate.”

Normally, if you’re thinking along the line of dangerous groups like the Ku Klux Klan or anarchists, that would sound like a good idea. The reason that it is not good, and is downright evil, is because Nessel’s definition of “hate and bias” applies only to (again) Michiganders who hold a Biblical worldview – and thus are considered anti-LGBT, anti-Islam, or anti-women’s rights (abortion).

The Attorney General’s spokeswoman, Kelly Rossman-McKinney, stated that the new database will be used to “review any groups identified as a hate group by the Southern Poverty Law Center (SPLC).” Great… the SPLC, a left-wing liberal organization which is an arm of the Democrat party, is going to decide what Michiganders exhibit “hate and bias.” That seems fair. God help us.

What exactly happens in this “review process,” and what happens if a group is considered “hateful” by Nessel’s liberal standards? Are they rounded up and thrown into jail? What happens exactly? The whole thing sound like Nazi-Germany to me, and completely unconstitutional.

Would liberals be ok with former Republican politicians in Michigan compiling a database of LGBT groups or of Planned Parenthood supporters in the state? You’d rightly be deeply concerned, and I would never support a Republican legislator doing that. That’s not what America is about. We can agree to disagree on the issues, and neither side should force the other to agree with them “or else.”

Sadly, one side of the political aisle has chosen to impose the “or else” option, and that of course is the liberal left. We conservatives on the right will fight to defund Planned Parenthood all day for killing babies, but we would never call for their supporters to become pro-life or else face strict penalties.

We oppose Gay Marriage consistently (or at least we should), and yet we would never tell people who support same-sex marriage to “watch their backs” if they are caught attending gay weddings. The Democrats don’t think that way today. It is their way or the highway. You agree with their worldview or you become public enemy number one.

Even some of this country’s biggest businesses aren’t safe from the Democrat’s targeted attacks against those who serve God over man. We all know how much left-wing liberals hate the restaurant chain, Chick-Fil-A. Democrat lawmakers in San Antonio, Texas, recently acted on that hate and voted to BAN the restaurant from the city’s airport because of the company’s “anti-LGBT history.”

Ready for the biggest statement of hypocrisy you will hear today? Following the vote, Councilman Roberto Trevino said, “With this decision, the City Council reaffirmed the work our city has done to become a champion of equality and inclusion.” HA! He literally just voted to “exclude” a business from his city because their beliefs were not “equal” to his. The double standards of the Democrat party are utterly ridiculous. 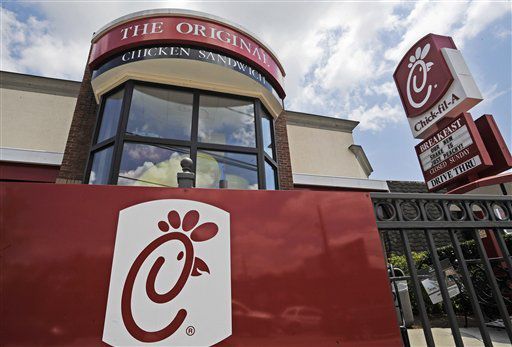 One of the reasons given for banning Christian-owned Chick-Fil-A is that the charitable foundation of the restaurant gives to Faith-based organizations. These organizations are considered “hateful” because they “discriminate” against LGBT people.

No, they do not discriminate. Just like an Islamic organization espouses Islamic beliefs, or a pro-choice organization like Planned Parenthood espouses liberal beliefs, Christian organizations have the right to espouse Biblical beliefs!

I’m sure some of you may have heard of Bank of America, BP, ExxonMobil, Jiffy Lube, Starbucks, United Airlines, and United Way… these are just 7 of over 200 well-known businesses that donate to the nation’s largest abortion-peddler. Am I calling for them to be banned from my state or my city?

Of course not, because they are free to give their money to whomever they please. Just like I am entitled to do, and just like Chick-Fil-A is entitled to do. Why can’t the Dems wrap their head around the First Amendment of this nation?! What they are doing in these 3 recent attacks on Christians is unconstitutional in every case – to say the very least.

The First Amendment guarantees freedom of religion and expression by prohibiting Congress from restricting the rights of individuals to speak freely. Every action of the Dems that I have recorded in this article spits in the face of freedom. Since most liberals today don’t believe in Him, many of them have begun to think that THEY are God.

Well, I’ve got news for Dana Nessel, my state of Michigan, and all of the Godless Dems running this country: there is a God… and I will continue to serve Him over you, and abide by His moral laws rather than your abominable laws of men. If you keep trying to make war on His children, then rest assured – whether you believe in Him and His Word or not – you are going to meet Him someday.

You are going to have to answer for why you took such delight in punishing those who put Him first. Even if Michigan is – or if the USA ever will be – completely Democrat-controlled, my life will always remain God-controlled. That will never change. Never.

To my Democrat family and friends: how much longer will you continue to support a party that literally tried to ban the Bible?! They are becoming more demonic by the day. To my conservative brothers and sisters: vote the bums out in 2020! VOTE THEM ALL OUT.

Read more about the demonic influence in the Democrat party, and Christian persecution, in my books 👇

“Woe unto them that call EVIL good, and GOOD evil; that put darkness for light, and light for darkness…” ~ Isaiah 5:20

“Jesus said.. Take heed to yourselves: for they shall deliver you into.. prisons, for you shall be brought before rulers and kings for My sake, for a testimony against them.” ~ Mark 13:9/Luke 21:12

“For many walk, of whom I have told you often, and now tell you even weeping, that they are the enemies of the Cross of Christ.” ~ Philippians 3:18

“Jesus said, Blessed are they which are persecuted for Righteousness’ sake: for theirs is the Kingdom of Heaven. Blessed are you, when men shall revile you, and persecute you, and shall say all manner of evil against you falsely, for My Sake. Rejoice, and be exceeding glad: for great is your reward in Heaven: for so they persecuted the prophets which were before you.” ~ Matthew 5:10-12

“Jesus said, Remember the word that I said unto you, the servant is not greater than his Lord. If they have persecuted Me, they will also persecute you.” ~ John 15:20

“Jesus said, the world hates me, because I testify of it, that the works thereof are EVIL.” ~ John 7:7

“And the dragon MADE WAR with those who keep the Commandments of God, and have the testimony of Jesus Christ.” ~ Revelation 12:17

“FIGHT THE GOOD FIGHT OF FAITH, lay hold on Eternal Life, whereunto you are also called, and have professed a good profession before many witnesses.” ~ 1st Timothy 6:12

“Be of good courage, and let us behave ourselves valiantly as the men for our people, and for the cities of our God: and let the LORD do that which is good in His sight.” ~ 1st Chronicles 19:13 & 2nd Samuel 10:12

“And be NOT CONFORMED to this world: but be you transformed by the renewing of your mind, that you may prove what is that good, and acceptable, and perfect, will of God.” ~ Romans 12:2