We are now only two weeks away from the release of my new book, EVEN MORE Signs of Our Times! In my previous article, I gave a preview of the chapter about Racism. In this article, the second preview will be the first few pages of Chapter Ten, which is about “Demonic Indoctrination.” I chose to preview this chapter because, just a few days ago, (after suspecting it was the case for so long) I finally caught Twitter red-handed “shadowbanning” me.

For those who are unfamiliar with the term, Twitter employees have been caught on camera admitting to the despicable act of blocking a conservative Christian’s tweets from the public – while still making them visible to the tweeter themself. This is why it is called a shadowban, because they are secretly banning your tweets from the platform (while making it appear to you that everything is working just fine).

In this chapter, I make reference to the shadowbanning, the suppression I’ve endured on Facebook, and how Google also holds an anti-Christian bias. I address how Satan’s hands are all over today’s media – not just the internet, but television and music as well. Without further ado, enjoy this second exclusive preview from my upcoming book –

“Now the Spirit speaketh expressly, that in the latter times some shall depart from the faith, giving heed to seducing spirits, and doctrines of devils (demons).” – 1st TIMOTHY 4:1

Mainstream Media today is no doubt under the control of Satan himself. Broadcast television has become nothing short of demonic. In just the past few years, there have been popular TV series that have been all about the devil himself. A majority of them actually paint him in a “good light.” A FOX drama (recently picked up by Netflix in 2018), titled “Lucifer,” portrays Satan as a caring and likable guy in human flesh.

The main character, “Lucifer Morningstar,” is supposed to make the devil look cool. He drives a fancy car, owns a nightclub in L.A., and is irresistible to women. He is painted as a “good guy” who is bored and unhappy as the keeper of Hell. In the script, he resigns his throne, abandons his kingdom and retires to Los Angeles. God sends an angel to “convince” Lucifer to return to the underworld.

Lucifer questions the angel, “Do you think I’m the devil because I’m inherently evil or just because dear old Dad decided I was?” The question is meant to make people rethink the Biblical teachings about good and evil, and about God and Satan. The show is spiritually dangerous to viewers, especially for young people who don’t know much about the Holy Bible.

A similar series, “Damien,” which thankfully was cancelled by A&E after one season, presented the AntiChrist as another “likable” young guy who didn’t seem that inherently evil. Meanwhile, our Lord Jesus Christ and the Holy Bible are consistently blasphemed and mocked across network and cable television. On an episode of AMC’s “Preacher,” the main character and his roommate tear pages out of the Bible and use them as rolling paper to smoke weed.

An NBC comedy, “Superstore,” deeply offended Christians by suggesting that Jesus not only “supported Gay Marriage,” but that HE was “gay.” I’ll bet that NBC would never say those kind of things about Muhammad of Islam. A blasphemous Adult Swim series, “Black Jesus,” portrays Christ as a weed-smoking, foul-mouthed, gang-related, African American in Compton. Where’s the outrage?!

What’s worse, if that were possible, so-called Family-friendly networks are promoting sinful trash to the youth. Disney has incorporated openly gay characters and couples into their TV series and cartoons, as well as in popular films like the 2017 remake of “Beauty and the Beast.” ABC Family went so far as to air the first-ever televised kiss between two underage boys.

Netflix rolled out a remake of the lighthearted sitcom “Sabrina the Teenage Witch” in 2018, and retitled it “The Chilling Adventures of Sabrina.” The new version has been dubbed “extremely Satanic.” It targets the same audience as its predecessor – teenage girls – but it is filled with “plenty of blood and gore.” It even features demons, such as “Baphomet.”

America’s youth have been subjected to more sex, violence, and profane language during the traditional early-evening “family hour” of broadcast television viewing than ever before. A watchdog group, known as the Parents Television Council (PTC), studied the animated TV shows ranked highest among viewers 12-17 years old; and then they monitored them for about a month.

The PTC analysts viewed around 125 episodes and found a total of nearly 1,500 incidents of explicit sex, drugs, and/or offensive language, within 57 hours of programming. Another study found that, from 2001 to 2007, sexual content rose nearly 25%. That was over ten years ago, so I can only imagine where those numbers are at today.

Parents today must be especially vigilant in monitoring what their children are watching, because long gone are the days of leaving them alone for hours in front of the tube. The devil wants all of our souls, and if he can’t get yours then he wants your children. He is using the media as his outlet to do that. If it isn’t television and movies, then he will use music.

Some of the most popular musicians have some form of demonic messaging in their songs, videos, or performances. Whether it’s Ariana Grande and her song “God is a Woman,” Jay Z and his obsession with Occult symbolism, Beyonce or Madonna and their demonic symbolism in live performances, rapper Lil Uzi Vert – whose name is supposedly meant as a nod to “Lucifer,” or Marilyn Manson tearing up the Holy Bible, there is no shortage of Satanic indoctrination (even worship) going on in the music world today.

The devil also has his hands all over the internet. Besides flooding the net with pornography, he has inspired the big three tech giants to all be extremely hostile toward Holy Bible believers. You can read on my website, BiblicalSigns.com, all about the neverending suppression and censorship that I have endured on Facebook over the course of the past four years.

Twitter was recently exposed for “shadowbanning” conservative Christians, of which I am also currently a victim. It has been long thought, by Holy Bible believers, that the tech giant Google holds an anti-Christian bias. In early 2018, we finally had the undeniable proof to confirm our suspicions.

Many Christians using the smart device “Google Home,” which is similar to Amazon’s “Alexa,” recorded videos of what appeared to be a blatant omission of our Lord Jesus Christ by the programmers at Google. The “virtual assistant” voice in the Google Home device (and even some smartphones) gave a detailed biography of every “religious figure” in the world, except for one… JESUS.

Google could tell you all about Allah and Muhammad of Islam, Buddha, Krishna, and many other false gods; but as to the Saviour of the world – God in the flesh – the King of kings – the Lord of lords – nothing. Though His Name is more well known than any other figure in human history, and He was so important to mankind that we actually keep time by Him (BC and AD), Google still had no clue Who He is.

To read the rest of this chapter, you’ll have to get the book on March 7th! Also, before February comes to a close, I’ll be releasing the Audiobook for my first book THE SIGNS OF OUR TIMES. Stay tuned to my social media accounts for announcement of the release date real soon! 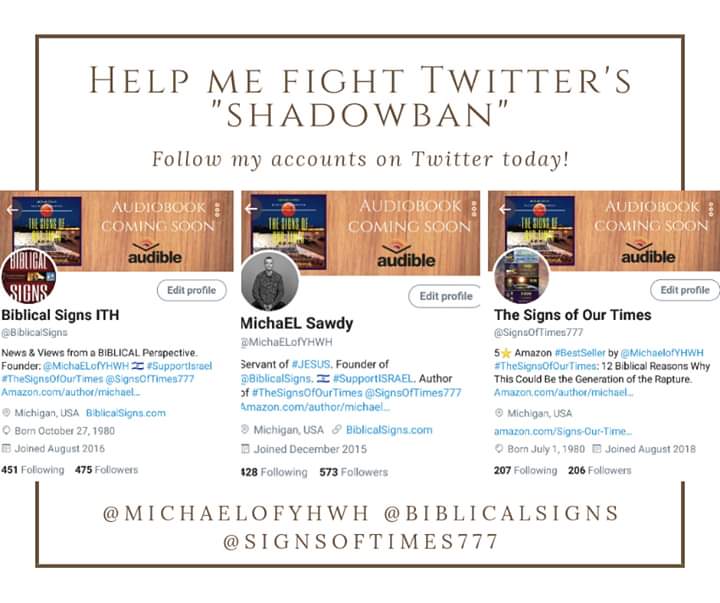 Get my first book #OnSaleNow 👇