Another demonic young shooter at another High School, another day of liberals calling for Gun Control while berating anyone who offers “prayers”, and another day of NRA supporters calling for more guns and not less. I guarantee there will be ANOTHER day just like this in the future. Probably many days like this. It is because very few understand, and are calling for, the ONLY viable solution to America’s School shooting epidemic. And that is to put Almighty God FIRST in this country again, and to bring His Word BACK into our schools.

America’s very first schoolbook was the Holy Bible, and every since it was taken out (along with prayer) the school environment has gotten less safe year after year. In a 1940 survey of public school teachers, the top disciplinary problems listed were talking out of turn, chewing gum, running in the halls, dress-code violations, and littering.

Look at where America’s downward spiral away from the LORD has led the nation’s school system today – the problems which this generation’s teachers report are drug and alcohol abuse, pregnancy, suicide, rape, robbery, assault, and of course the mass shootings. Things are unquestionably worse in our schools then they have ever been in this nation’s history.

Did Americans own guns at our nation’s founding? How about in 1940? The answer is yes on both counts.

Did teen boys have a thing for girls back then, and desire sexual relations with them? Again, the answer is yes. Did alcohol exist back then? Yep. So, how come there were no school shootings? How come hormonally charged teens weren’t getting pregnant? Why were those boys back then not raping girls as much as today’s generation? Why was there no assault? Why no alcohol use amongst the youth?

What was different back in the first century of the United States? Fear of God. Not only was the God of the Holy Bible revered above all, and children were taught Godly morals from a young age, but the Word of God was central to the nation’s education system. Teens back then would have never even imagined doing the abominable things that today’s youth do. 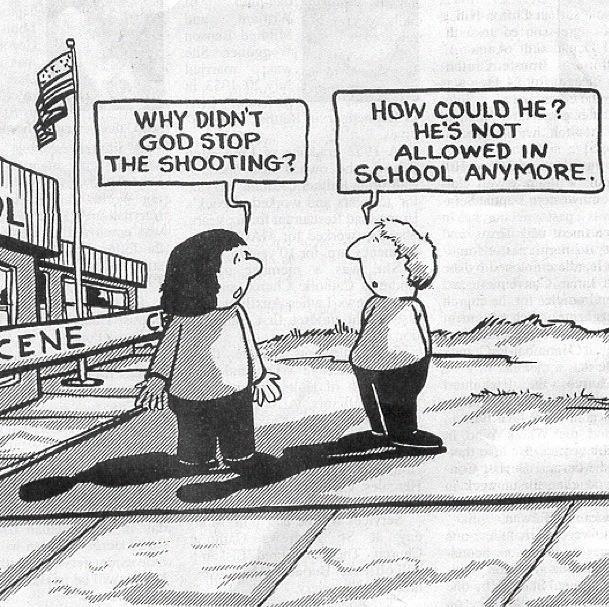 Yet here we are… No God in schools, coupled with a generation inundated daily with lust, gratuitous violence, glorification of drugs and alcohol, immorality, plus a bitter hostility toward the God of our fathers, and how can anyone be surprised that our schools have become warzones?

Today’s mass murder was perpetrated by 17 year old, Dimitrios Pagourtzis, at Santa Fe High School in Santa Fe, Texas. At least 10 people lost their lives, and about the same number were wounded. He reportedly used a shotgun, and a .38 caliber revolver to shoot his victims. Something that no proposed “Gun Control” laws would have been able to prevent.

The weapons belonged to his father, and it is unclear if they were made readily available to him or if he stole them from his dad. After Pagourtzis was apprehended alive, explosive devices were discovered at the school, in his home, and also in his vehicle along with a molotov cocktail. A pressure cooker, the homemade bomb of choice for Islamic terrorists, was also found at his residence.

Not surprisingly, the one thing that these young shooters all have in common are anti-God influences.

The deranged Parkland, Florida, High School murderer was anti-semitic, was obsessed with torturing small defenseless animals, and testified that “demons spoke to him”.

Today’s shooter must have idolized the Columbine psychopaths, because students say that Pagourtzis wore a long black trench coat, just like theirs, everyday. His social media accounts revealed that he, like they, also had a love for Hitler. 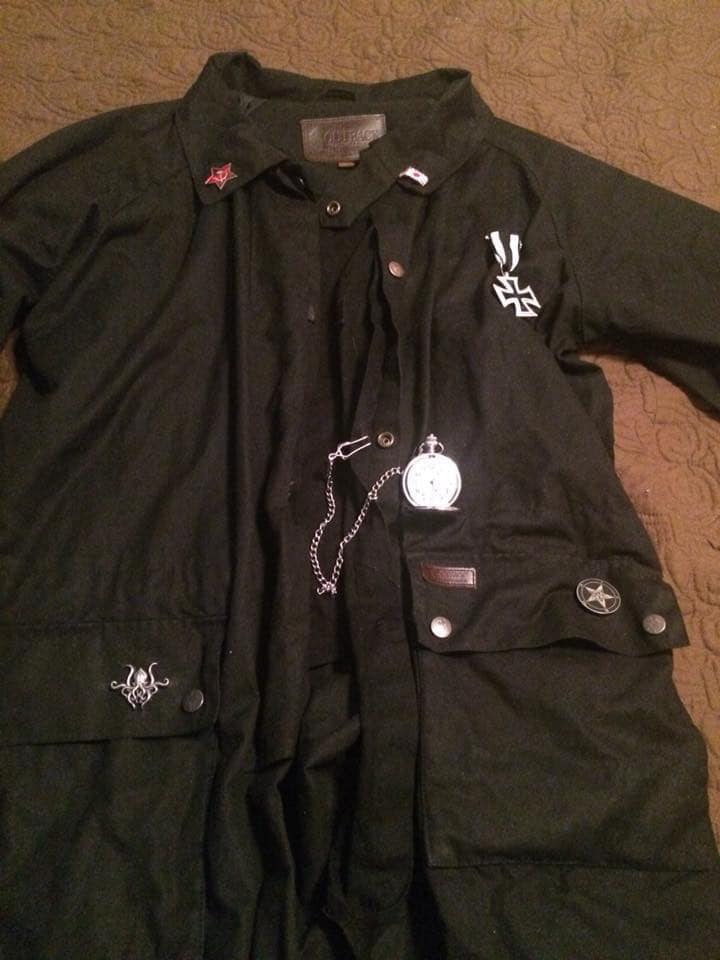 His clothing was adorned with Nazi, Communist, Fascist, and even Occult symbols. He attributed the “evil” side of himself to the demon Baphomet in one social media post. In another, a shirt he wore said, “BORN TO KILL”. This disgusting excuse for a human is being held by law enforcement tonight on a capital murder charge.

Today’s mass murder was NOT about the guns or the perpetrator’s mental health. Just like with Columbine and Parkland, this school shooting is the unfortunate result of youth not knowing GOD. These demonic kids are all the consequence of not teaching children the age-old Biblical laws regarding right and wrong. When there is NO God in the heart of man, evil will always thrive.

Whether it be an atheist, an Islamic terrorist, or a misguided teenager, evil people are prone to do evil things. Lord Jesus said in JOHN 8:44, “You are of your father the DEVIL, and the lusts of your father you will DO. He was a MURDERER from the beginning, and abode NOT in the Truth, because there is NO TRUTH in him.”

So anyone who does not abide in God, Who is the only Truth this world has ever known, will be capable of the most vilest of acts, even murder. That is what the liberals and Democrats screaming for “gun control” after these tragic events will never understand. Godless men, who are capable of murder, will weaponize ANYTHING that they possibly can to cause mass casualties.

The Islamic terrorists have proven this in recent years. If you ban guns, then they will use knives, machetes, axes, vehicles, or even pressure cookers. Will the Dems ever call for bans on pressure cookers or large trucks and vans? The “gun control” argument is always made by people who don’t believe in the age-old battle of “Good versus evil” and “God versus Satan”.

They think that they can stop the evil man from hurting another man by simply taking away his toy. They obviously have never read the story of Cain and Abel. Will the liberals ever ban stones??

I believe all of these mass shootings are just one of the many “Signs of our times” pointing to the Rapture of the faithful out of this mess. Lord Jesus prophesied that “As the days of Noah were”, so shall the days on earth be in the Season of His Return to earth. In Noah’s days, “the earth was FILLED with violence”.

The word for “violence” in that verse of Scripture can also translate to “TERROR”. So, He said that the world would be filled with terrorism in the Season of His Return. I don’t think that any generation, since the founding of America, has ever seen so much senseless violence and acts of terror.

Sadly, the youth are probably immune to it by now, they don’t know the world to be any other way. What we adults consider living in the “Last Days” prophesied in the Holy Bible, is considered normality in their world.

I reported a few months ago that a study by the Barna Research Group revealed that teenagers today are the LEAST Christian generation in American history. Only 4 out of 100 teens hold a “Biblical worldview”. 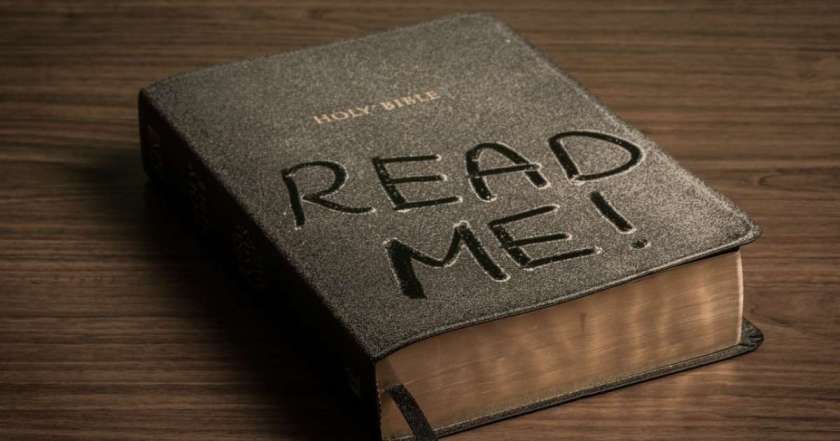 Also, more teens than ever before identify as atheists. It is obviously not all the fault of the youth themselves. Their parents are definitely not raising them by God’s command in Proverbs 22:6.

Maybe herein lies the reason why the liberals are always so quick to scream about “guns” being the problem, because they don’t want to take responsibility for the wicked culture which they themselves have created.

The plain truth is that less guns won’t stop evil men. More guns will only slow them down. Only JESUS can change the heart, head, and hand behind the weapon. We need Him back in EVERY school.

The only thing that we will EVER need any more of in this backslidden nation is GOD. We need a lot less politicians trying to fix this Country, and a lot more PREACHERS. Things will never get better in America, nor in our schools, until the kids get GODLY. Parents and Holy Bible believing teachers, it’s time to DO YOUR JOB, or else continue to weep over the deadly consequences of your negligence.

“They did not like to retain GOD in their knowledge, so God gave them over to a REPROBATE mind, to do those things which are not convenient; Being filled with all unrighteousness, fornication, wickedness, covetousness, maliciousness; full of envy, MURDER, debate, deceit, malignity; whisperers, Backbiters, HATERS OF GOD, despiteful, proud, boasters, inventors of EVIL things, disobedient to parents, Without understanding, covenantbreakers, without natural affection, implacable, UNMERCIFUL…” ~ Romans 1:28-31

“Know this, that the Law (of God) is not made for a righteous man, but for the LAWLESS and disobedient, for the UNGODLY and for sinners, for UNHOLY and profane, for MURDERERS of fathers and mothers, for MANSLAYERS.” ~ 1st Timothy 1:9

“… MURDERERS shall have their part in the lake which burneth with FIRE and brimstone (HELL): which is the second death.” ~ Revelation 21:8

“The flesh lusts against the Spirit of God, and the Spirit against the flesh: and these are contrary the one to the other… Now the works of the flesh are manifest, such as MURDERS… I tell you, as I have also told you in time past, that they which DO such things shall NOT inherit the Kingdom of God.” ~ Galatians 5:17-21

“This know also, that IN the last days PERILOUS times shall come.” ~ 2nd Timothy 3:1