If 2018 will be remembered for anything significant, thus far the abnormal weather is taking the cake. For those of you living in the Northeast, I’m sure you share my extremely negative sentiment over the bitter cold weather we have experienced for the past 6 months. While places like my home State of Michigan most always have longer Winters than other States, I cannot remember a Winter ever lasting so long and being so cold.

We are currently about one month into the season of Spring, and in the past week my State has experienced hail, freezing rain, and a couple of snowfalls. Obviously this is not weather associated with Spring. The trees have not yet bloomed as they should, and many of the outdoor animals are all kinds of confused. It turns out that I’m not wrong in believing this has been the longest and coldest winter of my 37 years of life.

After doing some research, I found that 2018 has brought the coldest April to Michigan in over 140 years. 20 of the past 21 days have been colder than the average temperature, and 14 of those days have been over 10 degrees cooler than normal. The weather has not been much different in neighboring States, such as Illinois. Forecasters say that this has been the second coldest start to April across Chicago in 130 years. Wisconsin, Minnesota, Iowa, and South Dakota also experienced record-cold Aprils and set new records for monthly snowfall as well. This winter, temperatures in the Northeast have at times been colder than ALASKA. The unnatural winter-like conditions to kick off Spring have caused the postponement of many seasonal events, such as a record number of Major League Baseball games.

If any of you ever believed the lie of “Global Warming”, or sadly still do, you must be living on another planet. If anything is occurring on earth, it is “Global COOLING”! Now, historically, extreme weather oddities like this would get the attention of the world. Unfortunately, this Godless generation has been brainwashed to believe that any rare acts of God in nature are instead the result of “Climate Change”.

This belief, in itself, is a fulfillment of Last Days Biblical Prophecy. The Book of Revelation tells us, time and time again, that the majority of people on earth will not come to repentance after extreme weather judgments, nor will they give God the credit or glory because of them. Revelation, Chapter 16, actually tells us that people will “blaspheme God” over the judgments, rather than repent. I see that happening every day in this wicked world.

Besides the record cold weather in 2018, my State has experienced other rare events. In January, a meteor struck in southeast Michigan, sparking a small earthquake in the metro Detroit area. I actually witnessed the meteor strike, as I saw a huge burst of light in my backyard around 8:00 pm. After hours of trying to determine what it could have been, the local news confirmed that a meteorite had fallen nearby.

Another extremely rare event which I also experienced occurred tonight, inspiring me to pen this article. Michigan may be known for many things, but earthquakes is not one of them. Tonight, at interestingly the same time as the meteor strike a few months ago, a 3.7 magnitude earthquake rattled southeast Michigan at 8:00 pm. The epicenter of the earthquake was actually in Amherstburg, Canada, but was felt across the metro Detroit area.

I was preparing for a small nap at the time as the bed began to shake. My cat Jacob shot up out of bed and ran to the window to figure out what was going on, as the shaking was accompanied by the sound of a large semi truck speeding by or a plane flying low directly over my home. I immediately thought that it felt like an earthquake, but again Michigan isn’t known for them. So, I was shocked when social media was lit up tonight confirming that it was indeed a quake which I had experienced. 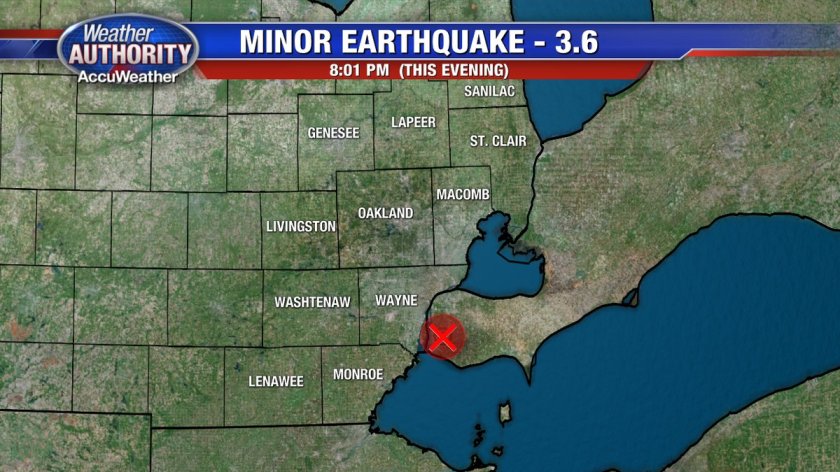 It is not just Michigan experiencing rare earthquakes though. Nebraska is also not known for the temblors. Yet, this week, the U.S. Geological Survey has confirmed 6 quakes in the State. This may not sound like a big deal to States like California, which are prone to numerous quakes in a day or week, but Nebraska has only had 46 earthquakes since 1975! That is over 40 years, and equates to about 1 earthquake per year. The Cornhusker State had 6 years worth in just 3 days!

Does God have your attention yet?! He has had mine for awhile, and that is why I created this website. I feel that I have been called to alert this backslidden world and nation to the signs of the times. Awake from your spiritual slumber, and stop buying the lies of an anti-God scientific community and mainstream media. The many rarities and unnatural events occurring in this world are not happenstance. They are not the result of global warming or climate change.

They are happening just like the LORD prophesied that they would in the latter days before our Lord Jesus’ long awaited return to earth. You can choose to ignore all of the recent signs, birth pangs, and harbingers all around us, but I caution you not to do so. Because if you do, God may ignore YOU come the rapture of His faithful. Pay attention, be ready, and DON’T BE LEFT BEHIND.

“They MOCKED the messengers OF GOD, and despised HIS Words, and misused His prophets, until the WRATH of The LORD arose against them, till there was NO REMEDY.” ~ 2nd Chronicles 36:16

“The earth is utterly broken down, the earth is clean dissolved, the earth is MOVED exceedingly. The earth shall REEL to and fro like a drunkard, and shall be removed like a cottage; and the transgression (sins) thereof shall be HEAVY upon it…” ~ Isaiah 24:19-20

“JESUS said, When you shall see all these things, KNOW that My Return is NEAR, even at the doors. TRULY I say unto you, the generation shall NOT pass, till all these things be FULFILLED.” ~ Matthew 24/Mark 13/Luke 21

“JESUS said, When THESE things begin to come to pass, then LOOK UP, and lift up your heads; for your redemption draws NEAR.. So likewise you, when you see these things come to pass, KNOW you that the Kingdom of God is NEAR at hand.” ~ Luke 21:28 & 31