On the first day of the “holiest” month in Islam, known as Ramadan, followers of the so-called “Religion of Peace” murdered over two dozen Christian Churchgoers in Egypt. Muslims who commit large-scale terror attacks against Christians and Jews like to do so during their Islamic “holidays”. They also carry out attacks on major Christian or Jewish Holidays, as we saw through recent Christmas and Easter attacks in Egypt. 28 Coptic Christians lost their lives today, and another 25 were wounded, at the hands of the Egyptian Islamists.

A bus was travelling to a Church south of Cairo on Friday, when 3 four-wheel drive vehicles pulled up alongside and opened fire. When the bus had stopped, 10 gunmen wearing fatigues and face masks exited the 3 vehicles and approached the passengers of the bus who remained alive after the first onslaught. Then came the life or death question… “Are you Christian?”

When the passengers said “Yes”, the terrorists distributed a pamphlet of Koranic verses which explained “Ramadan”, the Muslim holiday. The attackers then ordered the survivors of the group to recite the “Shahada”, which is the Muslim profession of faith. When the Christians refused, and said “No, we were born Christian and we will die Christian”, the Islamists opened fire at close range and murdered all of the men.

They shot some of the women and children next, and then robbed them of any valuables. Sadly, targeted attacks against Christians like this are not rare, but rather very common. The Coptic Christians only make up 10% of Egypt’s population of 92 million, and still that is 10% too many for the Muslim nationalists.

Just last month, during Easter celebrations in one of Egypt’s few Christian communities, ISIS terrorists bombed 2 Churches, murdering nearly 50 believers. The pair of attacks, which were only hours apart, targeted a Church in the City of Tanta and a Church in Alexandria. Four months earlier, in Cairo, Islamic terrorists bombed the main Coptic Christian Cathedral in Egypt, taking about 30 lives.

Over 100 Christians in Egypt have been murdered through targeted attacks in less than 6 months. Coptic Christians have been displaced from their homes in the Sinai City of Ismalia and persecuted in Minya, where their homes have been burned to the ground.

Last June, a Muslim mob looted and torched Christian homes and property in the village of Al-Beida, after rumors spread that one of the buildings was being converted into a Church. Over 80 Coptic Christian families were affected by the attack, leaving many injured. The Islamic mob destroyed all of the construction materials being used to construct the new Church.

They then turned their anger toward the men who were responsible for construction of the Church, leaving both men beaten and severely injured. The mob then began to loot Christian homes, and set fire to as much Christian property as they could. Damages were estimated to be around 500,000 Egyptian pounds.

In a story that has largely gone unreported in Western Media, there have been waves of kidnappings in Egypt as Christian women and young girls are abducted and FORCED into Muslim marriages. The Christian girls, some as young as 16 years old, are snatched from their homes, schools, and public sidewalks by Muslim men who then forcibly take them as wives. The families of the girls have begged police authorities for help, but to no avail.

This growing persecution of Christians in Egypt is not anything new, though it is finally making headlines across the world. In 2013, Muslim hostility toward the Christian community drastically escalated, as nearly 80 Churches, Convents and Christian schools were looted and torched across Egypt, along with scores of Christian businesses and homes. Christian clergy and laymen were beaten and killed, and Church officials were put on assassination lists.

In 2011, during the Egyptian uprising to oust their former leader Hosni Mubarak, CBS correspondent Lara Logan was brutally raped by a Muslim mob. Many Churches were set on fire during the “Arab Spring” uprising. In another instance of a Muslim woman being romantically involved with a Christian man, a Muslim mob burned the Church of the man.

Large groups of Coptic Christians protested the Church burning, and when the army arrived to stop the protests, the Egyptian military killed at least 24 Christians in what became known as the “Maspero massacre”. They were met with hundreds of riot police and tanks. Army vehicles charged at the protesters and there were reports of at least 6 protesters being crushed under the tanks, including one with a crushed skull.

In addition, witnesses confirmed that military personnel were firing live ammunition into the protesters, while the Health Ministry said that at least 20 protesters had undergone surgery for bullet wounds. In total, at least 25 Christians were killed, while numbers as high as 50 were reported. In another incident, a Muslim mob marched Catholic nuns through the streets of Cairo like prisoners of war in a sign of displeasure with Egypt’s Christian minority. 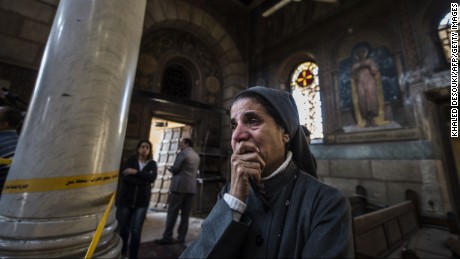 Sister Manal, principal of a Franciscan school, watched for hours as the mob looted her school, knocked the Cross off the gate and replaced it with a black banner resembling the flag of Al Qaeda. The Holy Bibles and the building were then burned to the ground.

Egypt is one of the many Islamic nations that contributed to Christians being the “most persecuted Religious Group in the world” in 2016. A Christian was murdered last year “every 6 minutes”. Over 90,000 Christians were martyred for their Faith, following 100,000 being murdered in 2015. Unfortunately, due to Islamists attempting to exterminate Christians from Egypt, Iraq, Syria, and elsewhere in the Middle East, those numbers may rise even higher in 2017.

The Muslims murdering Christians in Islamic nations like Egypt are not all members of terror groups like ISIS, rather they are regular everyday adherents of Islam. Their “holy book” instructs them to strike terror in the heart of unbelievers (Christians and Jews), and to “slay them wherever you find them”. Any Christians today who says that “we are all children of God”, and that “Islam is a Religion of peace”, needs to say that while looking into the eyes of a Coptic Christian. I tend to think that they would strongly DISAGREE. 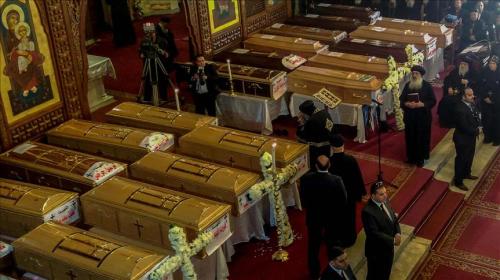 “JESUS said, Then shall they deliver you (Christians) up to BE AFFLICTED, and shall kill you: and you shall be HATED of all nations for MY NAME’S Sake.” – Matthew 24:9

“For MANY walk, of whom I have told you OFTEN, and now tell you even WEEPING, that they are the ENEMIES of the THE CROSS of Christ.” – Philippians 3:18

“JESUS said, Remember the word that I said unto you, The SERVANT is not greater than his LORD. If they have PERSECUTED ME, they will also persecute YOU..” – John 15:20

“Jesus said, BLESSED are you, when men shall revile you, and PERSECUTE you, and shall say all manner of evil against you falsely, for MY SAKE.” – Matthew 5:11

“… And the BEAST MADE WAR with the saints (Christians), to overcome them: and power was given him over ALL kindreds, and tongues, and nations.” – Revelation 13:7

“And when He had opened the fifth seal, I saw under the ALTAR the souls of them that were SLAIN for the WORD OF GOD (Holy Bible)..” – Revelation 6:9

“JESUS said… The time comes, that whosoever KILLS YOU will think that he doeth ‘God’ SERVICE. And these things will they (Muslims) do unto you (Christians and Jews), because they have NOT KNOWN the Father in Heaven, NOR ME.” – John 16:2-3