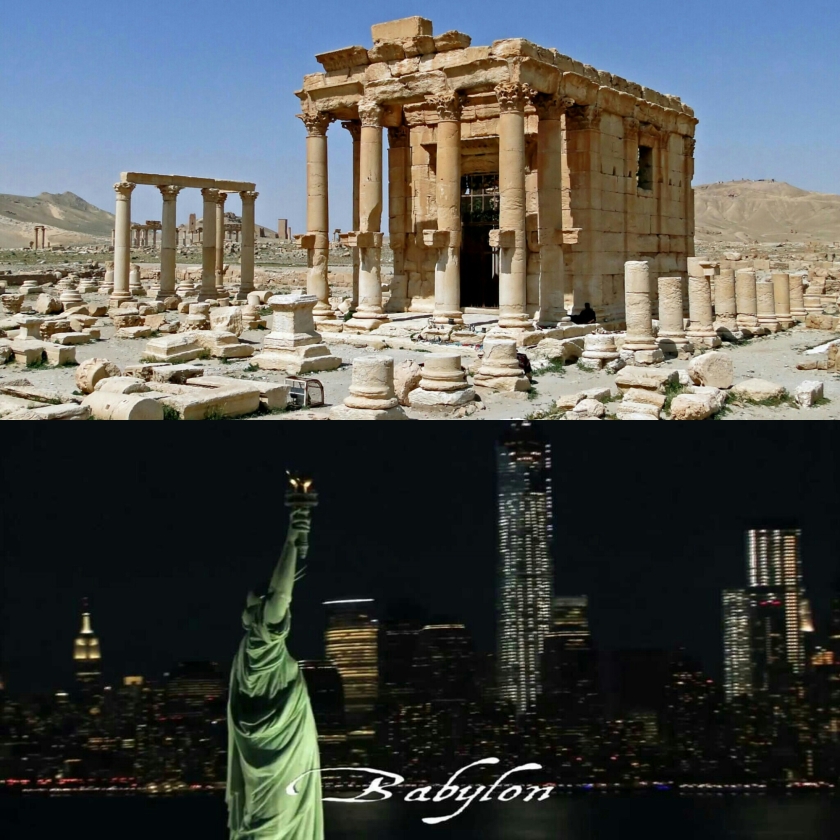 Israel and America are the ONLY two nations in world history who were, and are, dedicated to THE God of the Holy Bible, YaHWeH. He is The Father of our Lord Jesus Christ. He is the God of Abraham, Isaac, and Jacob (Israel). He is One with His Son and His Holy Spirit as The TRUE God of Heaven and earth FOREVER. He has ALWAYS been the God of the United States of America, no matter how much Obama, liberals, co-existers, muslims, atheists or others may hate it. It is historical FACT. It was in New York City, at St. Paul’s Chapel, that our Nation was dedicated to HIM. Our Founding Government joined America’s first President, George Washington, as upon bent knee and in earnest prayer he beseeched God’s favor and blessings upon this Nation. On that historic day of Washington’s Inauguration, our nation was officially committed and consecrated, by our very FIRST Leader and Government, to The LORD God Almighty. We went on to become the greatest and most blessed nation, behind only Israel, in the history of the world. Yet the same City, in which America was first dedicated to God, has been filled over the years with false god monuments, idols and imagery, and has become undoubtedly the nation’s hotbed for sinful abominations. Later this month, as a sure sign that we are in the “Last Days”, New York City plans to erect a lifesize replica of the temple of BAAL, chief of the Biblical false gods, in the heart of Times Square.

The reproduction of Baal’s temple is being constructed by organizers from the Institute of Digital Archaeology for “World Heritage Week”. Sadly, it won’t be a small attraction. It will be a 50-foot tall, 25-foot wide, 3D-printed replica of the entrance arch to the temple. One of the reasons given by the Institute for replicating the temple is to share this “cultural treasure” with as many Cities around the planet as possible. Cultural treasure? Not to a Holy Bible believer! Our God specifically warned numerous times in the Old Testament to NOT build temples or altars to FALSE gods, and He specifically condemned and warned against “Baal worship” more than any other.

“For he served Baal, and worshipped him, and provoked to ANGER YaHWeH (The LORD) God of Israel…” ~ 1st Kings 22:53

“And they BROKE DOWN the image of Baal, and brake down the HOUSE of Baal, and made it a draught house (TOILET) unto this day. Thus Jehu destroyed Baal out of Israel.” ~ 2nd Kings 10:27-28

“And they left ALL the Commandments of The LORD their God.. and worshipped all the host of heaven, and served BAAL.” ~ 2nd Kings 17:16

“Will you steal, murder, and commit adultery, and swear falsely, and burn incense unto BAAL, and walk after OTHER gods whom you know not?” ~ Jeremiah 7:9

“They have BUILT also the high places of Baal, to burn their sons with fire for burnt offerings unto Baal, which I commanded NOT, nor spake it, neither came it into MY Mind, saith The LORD God.” ~ Jeremiah 19:5

“And they BUILT the high places of Baal.. that they should do this ABOMINATION, to cause Judah to SIN.” ~ Jeremiah 32:35

“But what saith the answer of GOD unto him? I have reserved to Myself seven thousand men, who have NOT BOWED the knee to the image of BAAL.” ~ Romans 11:4

Ancient Baal worship permeates modern American culture, so it is not a surprise that the most abominable City in the nation today is building a Temple to recognize him. Worship of Baal, as described in the Old Testament, primarily included child sacrifice, sexual orgies, and homosexual debauchery. In America today, the child sacrifice is mirrored in abortion, and the homosexual debauchery is mirrored through the rise of the LGBT culture in America, especially through the legalization of Gay Marriage just last year. The Encyclopedia of Religion states Baal was transformed throughout history into another false god that has been on the rise in America in the past decade, ALLAH of Islam.

Baal was known among early arabic tribes, in the nations surrounding Israel, as the “Moon God”, who had 3 daughters who were viewed as intercessors for the people. (“And they forsook The LORD and served BAAL and Ashtaroth *goddesses*.” ~ Judges 2:13). Prior to Islam’s beginning, each Arab tribe used “Allah” to refer to it’s own particular high god. Baal, also known as Hubal, was the central focus of prayer, and people prayed to Hubal using the name Allah, which translated means “the god”. The CRESCENT MOON was the symbol of the moon god Allah and is STILL used as the symbol of Islam today. Also, it is important to note that Allah in the Quran is said to have 99 names, and one of them is “the great DECEIVER” (Quran 3:54 & 8:30). This should ring a bell in the minds of all Christians, as someone is called the great deceiver in our Holy Bible, and his name is SATAN. So, as Baal was always our God’s Chief Enemy amongst the false gods, it should be very worrying to Christian and Jewish Americans that Islam is being forced into our Nation at an alarming rate, and that a temple is being erected in America’s first official Capital, New York City, paying homage to BAAL.

If someone were to erect Jewish Holy Temple or Jesus’ Resurrection Tomb replicas in the heart of New York City, the liberals and atheists would be up in arms. Everyone today forgets that we have always been a Judeo-Christian Nation founded on ONE Holy Book, the Holy Bible, and the devil is doing everything that he can to ERASE that nearly 250 year historical fact. Under the Obama Administration, we have witnessed OUR God and Lord be forced out of Schools and the public square, while foreign religions, Satanic monuments, and now even temples of the CHIEF false god have been forced IN. If there were any Nation of the world today that best fits the description of the whorish latter Day “BABYLON” of the Book of Revelation, America takes the cake hands down. If I’m right in my thinking, then America’s future is very dark and destruction looms on the horizon.

America is not the only nation defying the True God though, as the Institute building the temple of Baal in New York plans to construct around 1,000 other versions of the temple’s arch in cities across the world. It is truly a global rebellion against God, orchestrated by Satan, to fulfill the prophecies in the Book of Revelation which state that the Devil will be WORSHIPPED as god worldwide. Satan has many names, and any god that is worshipped besides the God of the Holy Bible, whether it be Baal, Allah, Molech, Hindu gods, pagan gods, norse gods or many others, they are ALL the devil himself or one of his demons. So while the world thinks that they are pleasing God by pushing religious “co-existence” and being more “open-minded” to foreign ideas or cultures, they are in reality SPITTING in His Face and turning their backs on our Only Creator and True God. The world is rapidly going to HELL in a handbasket. Come quickly Lord JESUS!

“There shall be NO strange god in your land; NEITHER shall you worship ANY strange god.” ~ Psalm 81:9

“Let NO MAN deceive you by any means: for THAT DAY (of Lord JESUS’ Return) shall not come, EXCEPT there come a FALLING AWAY (from the Faith) first…” ~ 2nd Thessalonians 2:3

“And it SHALL be, if you do at all FORGET THE LORD your God, and walk after OTHER gods, and serve THEM, and worship THEM, I testify AGAINST YOU this day that you shall SURELY PERISH.” ~ Deuteronomy 8:19

“Then JESUS said unto him, Get BEHIND ME, Satan: for it is written, You shall worship (YaHWeH) The Lord your God, and HIM ONLY shall you SERVE.” ~ Matthew 4:10/Luke 4:8