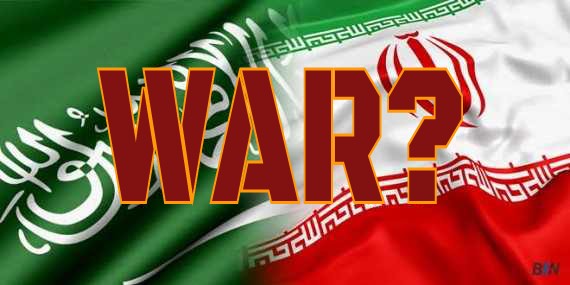 The recent conflict between the two regional foes has been dominating the headlines, and I knew that it had to have some kind of Biblical significance. Sure enough, it very much does. First off, let me just say that the U.S. should not pick sides in this battle, as they are BOTH our enemies. No matter how much the president or media eludes to Saudi Arabia as America’s ally, they most certainly are NOT. They are just as bad as Iran in their persecution of Christians and hatred of Israel. A Judeo-Christian Nation should never partner for any reason, whether political, economic or strategical, with a Country that executes Christians and calls for the destruction of Israel. Israel is our ONLY Ally in a Middle East. It would be best for Christians and Jews across the world if these two Islamic regimes would blow each other up, but after studying Biblical Prophecy, it looks like Iran comes out on top in any war.

I’ve always wondered why Saudi Arabia was never specifically mentioned in Psalm 83 or in the Book of Ezekiel when the Islamic nations are named who will fight together in an attempt to destroy Israel in the Last Days. Isaiah 21 has the answer why they aren’t a member of the muslim confederacy, and it’s definitely not because they are “for” or “with” Israel in any way shape or form. They obviously are not and never will be. The prophet Isaiah reveals that Iran will attack Saudi Arabia and will utterly DESTROY the kingdom. Whether that is what this conflict is leading up to now, or just another of the many precursors leading up to the war, if the Holy Bible says it’s going to happen, you can bank on it. The rabid dog Iran will have their day of destruction too, but not by another nation, by GOD Almighty Himself, after Iran, alongside Russia, leads the final military march against Israel.

The recent conflict between the two regionally influential Islamic powers began in this first week of 2016, meaning it should be a very Biblically Prophetical Year. Saudi Arabia executed a Shi’a cleric, Nimr al-Nimr. Protesters in Iran surrounded the Saudi embassy in Tehran, launched Molotov cocktails at the building, and stormed the gates. Saudi Arabia quickly announced that it was severing all diplomatic ties with Iran and gave Iranian diplomats 48 hours to evacuate Arabia. The reason for the hostility between the two nations is a “religious” one within Islam. The Terror State of Iran represents the Shiite branch of Islam. The Saudis on the other hand represent the Sunni branch.

The history of Sunni-Shiite rivalry dates back to some of the earliest years of Islam. Saudi Arabia declares Shia followers to be heretics. While Iran makes war with the Sunnis through it’s terror proxies all across the Middle East. Our Christians brothers and sisters in the region are the victims of terrorism from BOTH branches of Islam. One of the Prophecies pertaining to the Rapture of Christians and of Christ’s Imminent Return not long after is not just “nation rising against nation”, but more specifically He says “KINGDOM will rise against KINGDOM.” In today’s day and age and throughout Islamic history, Arab tribes, specifically the Sunnis and Shi’ites refer to their tribes as “KINGDOMS”. Not to mention Saudi Arabia and Iran both consider themselves to be “kingdoms”, with the Ayatollah Khamenei as the king in Iran, and king Salman is recognized as king of the Saudis. He actually lives in a palace. Just another Prophecy of Lord Jesus coming to pass before our eyes.

Iran and the Saudis have been engaged in their ideological and physical battle primarily in Iraq, Syria, Lebanon, Yemen, Bahrain as well as many other Arab Gulf States. They both have their own radical terror groups that do their bidding in their quest for Middle East domination. Saudi Arabia’s terror group is Al-Qaeda. While Iran employs Hezbollah and Hamas. Iran, along with their prophesied Last Days ally Russia, is currently backing the Assad regime in war-torn Syria, while Saudi Arabia is aiding the rebels who are trying to dethrone Assad. Iran is winning that war. If this current escalation of conflict between the two countries leads to an all-out war, Iran is the prophesied victor. Thank God that they too will eventually be a loser when they come against God’s Chosen Nation, Israel.

This War would definitely affect America and the West economically, mostly because Saudi Arabia and Iran have control over much of the world’s oil supply. Another Biblical Prophecy says that the oil in the region will be burned up. So it’s in the world’s best interest that the war doesn’t take place, but the Holy Bible says it will. If not now, rest assured that eventually it will. Most likely during the Battle of Armageddon, but given how triggerhappy the Iranians are, it could happen before the final war to end all wars, and it could happen SOON. Americans have Obama’s terribly BAD DEAL with Iran to blame for that, as he has not slowed down their Nuclear quest one iota, he has only emboldened them.

As I said at the opening, it would be good riddance if either of these anti-Christian, anti-Israel regimes were removed from the world. Though their branches of Islam are different, they still both adhere strongly to Muhammed’s murderous commands against Christians and Jews. Converts to Christianity from Islam in Saudi Arabia face the risk of being murdered or executed. House churches are raided by Saudi police. They do not allow Churches or Synagogues to be built in their Country. Saudi clerics have made many public calls for Muslims to burn down every Church in the Islamic lands.

While we all know how horrible Iran is to our brothers and sisters. Death sentences are common for Christian pastors who refuse to renounce their Christian faith, such as Youcef Nadarkhani. Iran charges, though he maintains he has never been a Muslim as an adult, that he has Islamic “ancestry” and therefore must RECANT his Faith in Christ Jesus. Our brother rightfully did not, but because he has not, he is currently facing the death penalty. So that is why, in this coming war, though I already know the outcome thanks to God’s Holy Perfect Word, I pray that Iran and Saudi Arabia would DESTROY EACH OTHER. That is the only favourable outcome this conflict could ever see.

“The burden upon ARABIA… the residue of the number of archers, the mighty men of the children of Kedar (City in modern day Saudi Arabia), shall be DIMINISHED: for The LORD God of Israel has SPOKEN IT.” ~ Isaiah 21:13-17

“Therefore thus saith The Lord GOD… they of Dedan (modern day SAUDI ARABIA) shall fall by the SWORD.” ~ Ezekiel 25:13

“I saw the tents of Cushan in affliction: and the curtains of the land of Midian (modern day Saudi Arabia) did TREMBLE.” ~ Habakkuk 3:7

“There is Elam (modern day IRAN)… which caused their TERROR in the land of the living; yet they will bear their shame with them that GO DOWN to the pit (Hell).” ~ Ezekiel 32:24

“JESUS said, You shall hear of WARS and rumours of wars: see that you be not troubled: for ALL these things MUST come to pass, but the end is not yet.. Nation shall rise AGAINST nation, and kingdom AGAINST kingdom.” ~ Matthew 24:6-7/Mark 13:7-8/Luke 21:9-10