At a time when the Black Lives Matter movement is center stage and growing in popularity, especially amongst ignorant youth, many Conservatives and Christians are afraid to speak out against them – for fear of the angry mob that they have whipped up across this country. I have never been one to cower to intimidation or bullying, so I thought it was about time for someone to speak out against BLM; and since very few are willing, I’m not afraid to be that guy.

To begin, there is a difference between supporting my black brothers and sisters when they’re in danger or fear, and standing with an unruly riotous Left-Wing hate group looking to divide this Nation.

I do the first every day (even before #BlackLivesMatter was ever a thing), though I’ve made clear that I don’t see people in color because my God is colorblind. I support all of my fellow believers who feel marginalized or who just need a friend. We are all one race in our Holy Lord Jesus.

I will never do the second, no matter how popular the BLM movement becomes – and no matter how much I’m hated or shouted down for not doing so. I have written about the Black Lives Matter group for about 5 years now, on this website and in my books, and they have never given me a reason to write anything positive about them. And their actions during this whole George Floyd tragedy have just reinforced my negative feelings toward them.

The “blackout” on social media, of teens and college kids posting an all-black image on Instagram or Snapchat, was not enough for the group’s cause. They are not looking for solidarity. They are looking to use the unfortunate death of George Floyd to raise funds for their organization. I could not count just how many posts I saw from the Black Lives Matter accounts saying, “Do you really support us? Black boxes are not enough. Support us with your wallet. Donate to the cause today.”

Some went so far as to say, “if you’re white, and you aren’t donating to the cause, then you are part of the problem.” Wow. So all of the uneducated young suburban kids who thought they were doing the right thing, by standing in solidarity with BLM, were told that they weren’t doing “enough.” What an upstanding group of people behind the Black Lives Matter movement, huh?

That’s not all though. They also tried to hit us Christians and Conservatives, who don’t support BLM, with accusations of racism for not sharing their hashtags or speaking out in favor of the unruly protests. Many of them were saying, “If you’re silent, you’re compliant,” or “Silence is consent.” What they meant by that was, in no uncertain terms, if you don’t speak out on behalf of our cause then you are just as racist as the cop who murdered George Floyd. 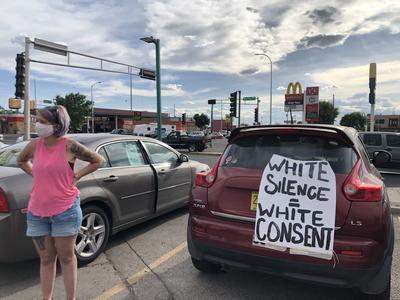 BLM members were not the only ones spreading this ridiculous narrative. Prominent Democrats were spreading similar irresponsible messages. The head of the Democrat Party in my home State of Michigan actually said that “every Michigander who supports President Trump is a RACIST.” There was no “if” or “when” added to her comments. She ended the statement where I have placed the period. She was calling roughly 5-million people in my state “racist” because we don’t agree with her politics or ideology.

Other BLM activists have gone even further, saying that “all Trump voters” in this country are racist. So, they are calling half of this nation – about 150-million Americans – racists. Newsflash… that is not going to win any hearts over to your side. Not by any means. If anything, you push people further away with such blanket false accusations.

Would it be acceptable for me to call “all Democrats” anti-Semitic for supporting Ilhan Omar, Rashida Tlaib, Keith Ellison, AOC, Obama, or the many other anti-Israel Dems? Of course, I’d be wrong. You can’t paint either political party with such a broad brush. Yet, the Dems do it with Republicans and Conservatives all of the time. I’ll never stoop to their level.

What I will do, though, is call out hateful anti-Semitic groups when I see them – and Black Lives Matter is one of those groups.

BLM was formed in 2014 as a merger of activists from the grossly anti-Semitic Nation of Islam, and Jew-hating Black Panthers. BLM has also voiced their support for the BDS (Boycott, Divestment, and Sanctions) movement, which supports Palestinian terrorism against Israelis and calls for the destruction of the Jewish State. As the biggest supporter of the Nation of Israel that you will ever meet, this is the number one reason why I could never stand with or support their movement.

Sadly, they have given me other reasons as well. The leaders of BLM have said, “We are committed to disrupting the Western-prescribed nuclear family structure requirement…”

So, they are against the Biblical model of a family – Father (Husband), Mother (Wife), and children. This just goes to show that Black Lives Matter is not about Black lives at all, but simply radical politics; because fatherless homes and abortion are the biggest reasons why inner-city black communities have seen so much crime in this country. BLM is in favor of BOTH.

We need a #BlackBabiesLivesMatter hashtag in a call to defund Planned Parenthood – not the Police. PP has killed far more blacks than cops ever have – over 15-MILLION since 1973. The hashtag trending would expose Black Lives Matter for caring more about politics than black “lives” because they would surely put out a statement in support of their left-wing ally, Planned Parenthood. There are far too many black babies today who CAN’T BREATHE.

They have also allied with the radical LGBT “Pride” movement in their quest to destroy the traditional family, as their leaders have also said, “We foster a queer‐affirming network. When we gather, we do so with the intention of freeing ourselves from the tight grip of heteronormative thinking, or rather, the belief that all in the world are heterosexual.”

As if all of this was not enough to push Bible believers like myself away from the #BlackLivesMatter hashtag and movement, they also advocate for the Godless theory of climate change/global warming.

Perhaps the worst beliefs and statements to come out of BLM are concerning the police. There are no good cops in the eyes of their movement. They lump the millions of fair, just, and honest cops in with the small handful of racist officers. Their language has inspired others to attack and even assassinate cops. Some of the slogans that they chant in protests and marches are:

“The only good cops are dead cops.”

Some of the police officers that were recently severely injured or even murdered by the rioters were BLACK MEN. How can a group called “Black Lives Matter” be okay with that? Your supporters intentionally harmed or killed the lives that you claim to care for. Does it not count when those “Black lives” are police? Conservatives? Republicans? Do only criminal, liberal, or Democrat black lives “matter”? Sure seems like it.

That may explain why they are now calling to “defund the police.” No joke. They, and their fellow communist-minded groups like Antifa, want chaos and anarchy. They don’t like things the way they are, or the way they’ve been, and so their answer is to burn it all down – literally. 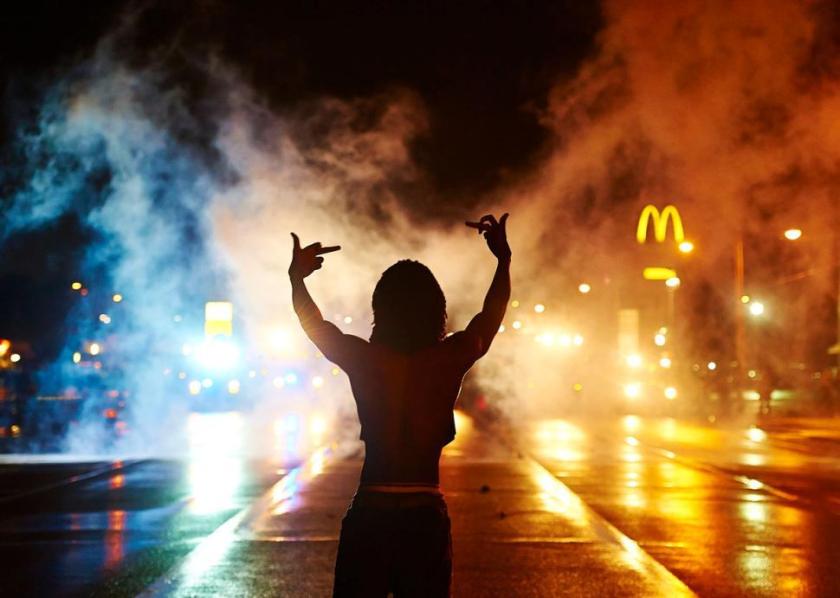 I said in my previous article, and I will repeat it again… I fully support #JusticeForGeorgeFloyd, but I cannot speak out strongly enough against the thuggish BLM rioters.

Rioting, looting, violence, vandalism, and burning buildings, cars, or property having NOTHING to do with George Floyd or racism, DOES NOTHING for George Floyd. Nothing whatsoever.

Two wrongs do not make a right, and protesting a crime while committing crime yourself is the epitome of hypocrisy.

On top of that, most of the property and businesses that have been looted, vandalized, or burned down in the recent riots, were owned by blacks! #BlackLivesMatter is a SHAM.

In my last article, I shared an excerpt from my second book, Even More Signs of Our Times, about Racism. Now, I’d like to share another portion of that chapter about Black Lives Matter –

Unfortunately, most young blacks today appear to be siding with Malcolm X over Martin Luther King. Just look at the slogan of the popular Black Lives Matter movement – “No Justice, No Peace.” If King were alive today, I believe that his message to this group would be: “Know JESUS, Know PEACE.”

No one that I call a friend would ever say that black lives “don’t matter.” All lives matter to God. The trouble with groups like BLM is that their riotous and violent methods are not doing anything to unite this country. They actually only push us further apart. BLM is no better than Richard Spencer’s racist alt-right Nazis.

Instead of taking a cue from Lord Jesus and Dr. King – to drive out darkness with light and hate with love – BLM activists, instead, burn down buildings, destroy property, assault those who disagree, and clash with police. Their desired end most certainly does not justify the means.

BLM is keeping racism alive and well in this country. They put blacks into their own category, just like the KKK puts whites into their own category. This should not be so. If they truly want all people to be equal, in order to make MLK’s dream a reality, then they need to stop alienating themselves as an “other.” God does not see any of us in color! So, why then do we focus so much on the shades of our skin?

If you are a Holy Bible believer, then you are my brother or sister. Period. The complexion of your skin has no bearing on that fact whatsoever.

It is one thing to stand up for justice, and for what is good, and right, and Godly.

If any group of black protesters is doing that, then I will stand with you.

It is a whole ‘nother thing to stand with a group that commits crime (in the name of justice), does evil, does wrong, and is lawless.

I’m looking at you BLM, and that is why I will NEVER stand with you. 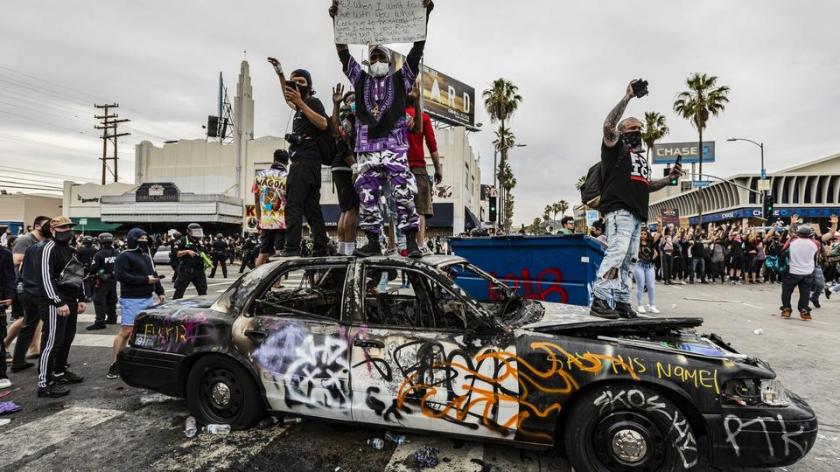 “God has made of ONE BLOOD all nations of men for to dwell on all the face of the earth.. and has determined the bounds of their habitation.” – Acts 17:26

“Whoso keeps the law is a wise son: but he that is a companion of RIOTOUS men shames his father.” – Proverbs 28:7

“If any be blameless.. have faithful children not accused of RIOT or unruly.” – Titus 1:6

“Judge not according to the APPEARANCE, but judge righteous judgment.” – John 7:24

“… For the LORD sees not as man sees; for man looks on the OUTWARD appearance, but the LORD looks on the HEART.” – 1st Samuel 16:7