Apparently October 16th is now “International Pronouns Day,” the day when guys want to be referred to as girls, girls want to be referred to as guys, or some want to be called BOTH. Did I miss something? I thought October 31st was Halloween? That is supposed to be the day when people dress up as, or pretend to be, something they are not. Since most Christian leaders are silent on this issue, let me bring everyone living in a fantasy land back down to reality.

If you were born a boy, then you are a he/him.

If you were born a girl, then you are a she/her.

Those have been your pronouns since you entered this world. Pretty simple. You cannot change them because you “feel” like you are something else. Why don’t we just start referring to people as dinosaurs, or to the evolution believers as monkeys? If that’s what they “identify” as, then why not?

Because it is just stupid and childish. That’s why. Make-believe time is over once you become an adult.

On liberal Twitter today, where this #PronounsDay nonsense was trending, advocates for the Day were saying that people who don’t refer to others by their “preferred” pronouns need to be “educated.” No. It is the other way around. Y’all need to be educated in basic truths.

Male is male and female is female – just as the sun is hot, black is black, white is white, and 2+2=4. I would prefer that winter was warm like the summer, but that doesn’t change the FACT that it is and has always been cold. It is just the way it is.

I gave this confused generation a much-needed reality check in my first book, The Signs of Our Times. Here is what I had to say about the gender insanity that we have been seeing in this nation and world today –

Call me old-fashioned, but I still believe in things the way that God created them to be. When I was growing up in the 80’s and 90’s, boys liked girls and girls liked boys. Boys were still boys, and girls were still girls. Today, you never know what someone truly is half of the time.

People are calling themselves transgender, pangender, cisgender, gender-fluid, or even genderless. It is downright ridiculous. This society has been making war (virtually unopposed by the mainstream Christian community) on every truth of God’s Word. I mean every truth, including the most basic truth in human history – “In the Beginning, God created them male and female.”

That verse is pretty plain, and to the point. There should be no wiggle room for other interpretations. God made a man, and God made a woman – God said be fruitful and multiply – these two had relations, and made babies – and that is the reason why every one of us is here today. If Adam decided one day that he wanted to be the woman, or Eve decided that she wore the pants in the garden, then there would have been no Abel, Seth, Noah, Shem, Abraham, Isaac, Jacob (Israel), Judah, Joseph, Moses, David, and not even a Lord Jesus Christ.

Our Lord would not have needed to come down to Earth, because the human race would have died out 6,000 years ago. Since the dawn of the earth, as we know it, there have always been only two genders: male and female. Period. God first created man. He then created woman for man. If God thought that it was ok for Adam to lay with other men, then God would have just created another man. He didn’t. He created Eve.

The LORD also gave the command of marriage: for a husband to take a wife, and to cleave together and become “one flesh.” God created men and women with distinct body parts that come together to produce offspring. You cannot produce babies with two man parts or two woman parts. It is basic human biology! As recently as 2012, the American Psychiatric Association considered “gender identity disorder” to be a mental health problem. In God’s Eyes, it most certainly is.

While society is telling you to encourage your children to make their own “identity,” Almighty God has already given them one at birth. The Book of Proverbs, Chapter 22 and verse 6, commands us to “Train up a child in the way they should go, and when they are old, they will not depart from it.” Christian parents need to be more active in the lives of their children than ever before. If you’re not raising them, then you can be sure that someone else will.

I personally could care less if a man or woman gets offended when I call them what God created them to be, which is a “man” or a “woman.” If their feelings are hurt because I don’t refer to them by another pronoun, then they need to take it up with God Who created them and not me. We believers cannot tiptoe around Biblical truth, in order to not anger or offend someone.

I don’t care how many sex changes someone like Bruce Jenner has had, or will have. He can call himself “Caitlyn” all that he wants, but he will always be Bruce “the man” to me. That is what he forever will be in God’s Sight. It has gotten so bad that we’re debating today over “Transgender Bathroom Bills” to decide whether or not a grown man should be allowed in the same restroom as little girls.

This is craziness! There should be no debate. If you were born with male parts, you use the men’s restroom. If you were born with female parts, then you use the girl’s room. God-fearing people of this world need to stand up and say ENOUGH IS ENOUGH. If we don’t speak out against this insanity, then who will? It is high time for us believers to be the desperately needed adults in the room.

Read more in the LGBT “Pride” chapter of my book and even more about the subject in my second book, Even More Signs of Our Times.

If you are not a small child or an actor, let’s leave the pretending to be another identity confined to Halloween. Because in God’s eyes, you are what you were born as – what you were created as. Believing or claiming that you are anything or anyone else is rebellion against your Creator. That never ends well. 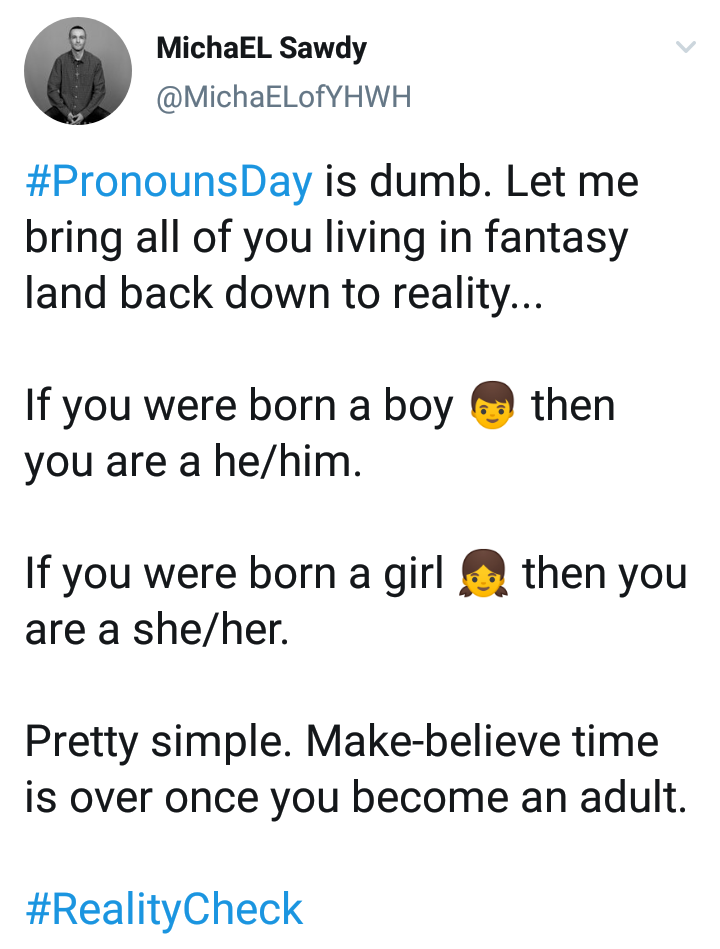 “They changed the truth of God into a lie, and worshipped and served the creature more than the Creator, who is blessed for ever. Amen. For this cause God gave them up unto vile affections: for even their women did change the natural use into that which is against nature: And likewise also the men, leaving the natural use of the woman, burned in their lust one toward another; men with men working that which is unseemly, and receiving in themselves that recompence of their error which was meet. And even as they did not like to retain God in their knowledge, God gave them over to a reprobate mind, to do those things which are not convenient.” – Romans 1:25-28