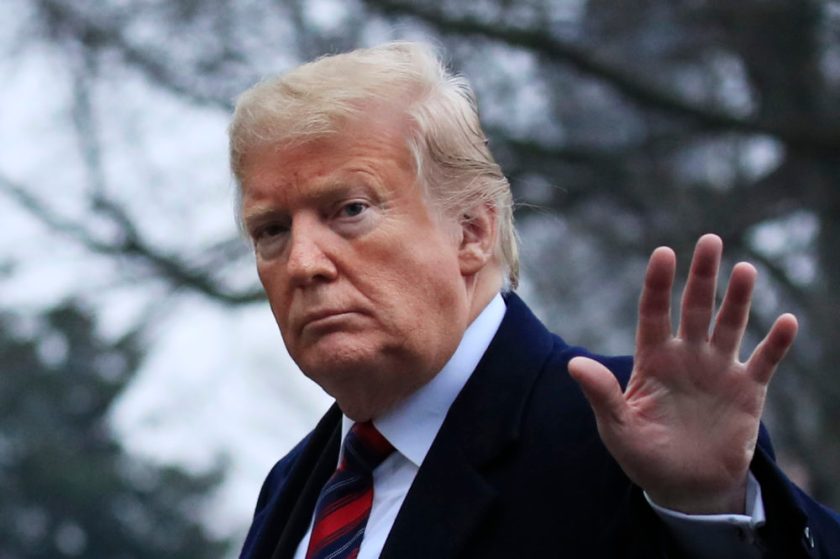 “Donald Trump is a racist”… If you turn on CNN right now, that is most likely what you are hearing every host, anchor, and liberal pundit say. They seem to think that if enough of them say it, and say it enough, then you will eventually believe it.

It is nothing but false witness being spread for political purposes. It is deceitful and shameful. It is because the Democrats are desperate. They know with how far-left their party has been pulled that most Christians and God-fearing Jews who long supported them are jumping ship.

The modern Democrat party mocks and blasphemes our God.

They constantly disparage and attack the teachings of the Holy Bible.

They support infanticide (abortion of a baby up to the moment of birth).

They promote and even celebrate the abominable sins and perverseness of the radical LGBT movement.

They have abandoned supporting America’s greatest Ally on the world stage, God’s chosen Nation of Israel; and they are defending and propping up anti-Semites within their ranks.

Thus, it is no wonder that they are pulling out all of the stops in trying to pull people back to the party by hurling the most abhorrent labels upon the President and Republicans.

Their false-labeling of Republicans, in order to garner votes is nothing new, as they have been doing it more and more over the course of the past decade. The more that they become anti-Christian, anti-Israel, Biblically-hostile, and downright demonic, the more desperate they get in their line of attacks against their political adversaries.

Nothing is off-limits. The more vile the slurs and false witness – the better, as far as they are concerned. Since they cannot win hearts and minds of Americans with their platform and policies, they have to demonize the other side as much as they possibly can. They have been using this tactic against Republicans for years.

Donald Trump is not the first Republican President that they have called “a racist,” and he won’t be the last. Don’t you all remember when they joined Kanye West in declaring that “George W. Bush hates black people”? Yet, today, the Dems and CNN seem to love Bush – especially when he speaks out against something President Trump does or says.

The Dems have done the same with another familiar face of the GOP. I’m sure you’re all familiar with the 2012 Republican candidate for President, Mitt Romney, whom the Dems all love so much now for “standing up” to President Trump. During the 2012 Election, they called Romney racist, sexist, a bigot, and every other dirty label that they could think of.

Yet, now that he’s not running for President, he is all of a sudden NONE of those things. Interesting…

Today, many of them call him an honorable man of integrity (but only because he opposes Trump on many issues). If he were President right now instead of Donald Trump, no matter how squeaky clean Romney’s life or record is, you can be sure that he would be labeled “the worst human being on the planet” by CNN, MSNBC, liberal celebrities, and the Democrats. 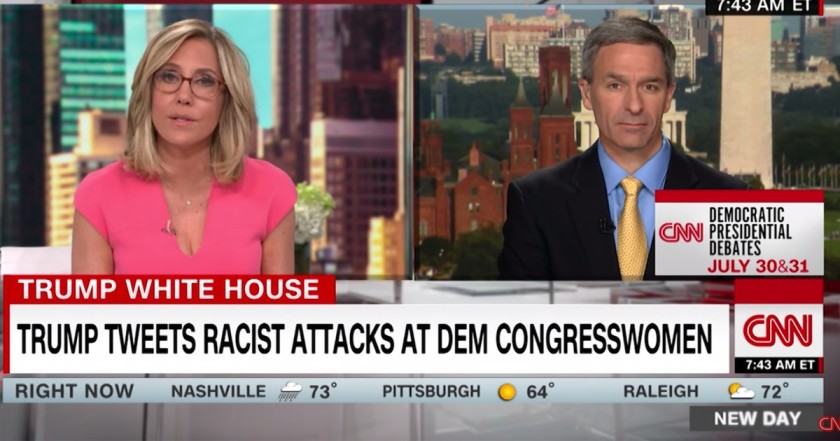 No matter how untrue a slur against an opponent of the Democrats may be, it doesn’t bother their conscience one bit to keep repeating it over and over again. If it helps them politically, which it usually does with uninformed voters, then they will spread false witness against whomever they deem a threat.

Of course, the biggest threat to the Democrat Party right now is President Donald Trump.

They absolutely hate him with a passion, yet (AGAIN) many of them used to love him when he was a celebrity. Trump actually used to vote for and donate to the Democrats, and he used to be a New York liberal (may even still be on some issues). But now that he is President, none of them seem to remember that.

The popular mogul whom they used to call an ally, and even a friend, became their biggest enemy in 2016. He has remained their biggest enemy. Thus, their one-time pal was all of a sudden dubbed a Russian puppet, a traitor, a colluder, an illegitimate President, a rapist, a sexist, and now a RACIST.

Again, I say, it is all very interesting isn’t it?

The first time that they hurled the “racist” label upon Trump was after the Confederate Monument protests in Charlottesvile, Virginia. They took his words, “there were fine people on both sides” of that event, to mean that he somehow thought the Neo-Nazis hosting a White Supremacist rally there were “fine people.” If you look back at what he said, in context, you will find that he was not referring to the White Supremacists.

He was instead referring to the people who were rallying in favor of, and protesting against, the Monuments – which at that time were being taken down across the country. Those were the “both sides” that he was referring to. He was not referring to the White Supremacists, who hijacked the Monument counter-protest to spew their hate against Jews and African Americans.

If you were watching CNN, you wouldn’t know that.

The failing news network, as they usually do, did the bidding of the Democrat party and twisted the words of Trump to make him out to be a racist to their viewers. That is exactly what CNN and the Democrats are doing this week. The real racists (more specifically ANTI-SEMITES) of our day, who hold positions of power in our government, have been portrayed as the VICTIMS of racism – not the peddlers of it.

Of course, I am speaking of the four radical freshman Democrat congresswomen, Ilhan Omar, Rashida Tlaib, Alexandria Ocasio-Cortez, and Ayanna Pressley. These 4 women hurl insults and verbal attacks at the President on a daily basis, in the hopes of getting him to fire back at them via Twitter.

Whenever they do get under his skin and provoke a response, even though they lambast him 24-7 with vicious and vile slurs, the lamestream media (specifically CNN) says that he is attacking them because of “their color.” Funny, as I hear the President verbally attack (whether he’s right or wrong in doing so) people of every color, gender, and creed if they rile him up. It should be no different with those 4 congresswomen.

Their color or religion shouldn’t matter one bit when he responds to their criticism. Muslims Omar and Tlaib, especially, always poke at the President via Twitter; so, they most definitely deserve whatever they get in return from him. Still, whenever he issues a fiery response to them (just like he does with everybody else), they always play the victim card.

They, Pelosi, and CNN, always say that he is attacking them because they are “muslims” or “women of color.” No. The man is attacking you because you two foul-mouthed, disrespectful, anti-Semites talked trash to him and that merited a response. Those two always get what they have coming, and I love when Trump doesn’t hold his breath for fear of the media labeling him “Islamophobic.” He doesn’t care.

While there is a lot that me and Trump do not agree on, I do have to say that it is refreshing to have a man standing up boldly and fearlessly for many things that I do advocate for. He doesn’t care what anyone says or thinks about him, he shoots from the hip, and I respect that in our President.

He is by no means perfect, and he by no means portrays the Christian faith or Conservativism the way that it is meant to be; BUT he also isn’t afraid to defend the values of both in a country that has fallen so far away from both.

That is why it bothers the heck out of me when Godless Democrats, and the liars and gossipers who spread false witness at CNN, always criticize the President’s “moral character.” How can either of them, who seem to possess no Godly morals or values, criticize anyone else’s morality?

To be perfectly honest (coming from a man who has devoted my life to God’s Word), as much of a sinner as Donald Trump has been throughout his life, the man is a SAINT compared to today’s Democrats and the libs at CNN.

Seriously, most of the activists who regularly hate and protest Trump advocate for things that the Holy Bible dubs as abomination, vile sin, and things that God HATES. So, how can Trump’s opponents ever possibly hold the moral high ground?! I guarantee you, in God’s eyes, they DON’T and they never ever will.

Trump is far from being a perfect man, but none of us are. Anyone who claims to be is a liar. Now, I’m not a card-carrying member of the GOP, and I’m also not a huge supporter of the President, but I will always defend him when the Dems and CNN are bearing false witness against him.

You can go back and read my articles since Donald Trump first became the Republican nominee in 2016, and you will find that I was extremely critical of him. I thought that he would be more liberal than conservative as President, but I do have to admit that he has pleasantly surprised me.

He’s still a little too liberal on some issues for me but when it comes down to Trump versus ANY of the Godless Democrats in 2020, you can bet your bottom dollar that I would vote for him over them every day of the week. It is not even a question. No deliberation needed.

While the President may not be living the holiest of lives according to the Holy Bible, at least he is not attacking nor calling to abolish God’s Word from our nation like the Dems do on a regular basis.

The President is 100% right in telling the anti-Semitic, anti-Israel, Biblically-hostile haters of Judeo-Christian America to “LOVE IT OR LEAVE IT.”

I loudly echo his statement.

The color of the skin of Omar, Tlaib, Cortez, and Pressley has absolutely nothing to do with it. Their Godless beliefs and agendas have everything to do with it. I say “LEAVE IT” (and I am sure that the President would as well) to Nancy Pelosi, Pete Buttigieg, Kirsten Gilibrand, Bernie Sanders, and every white Democrat who hates our nation’s Biblical fabric.

President Donald Trump is NOT a racist. So just stop it already. If you are joining the Dems and CNN in peddling that lie, then I would be very careful; because what goes around comes around, and it is only a matter of time before someone spreads false witness about YOU.

“A false witness shall not be unpunished, and he that speaketh lies shall perish.” – Proverbs 19:9

“But the fearful, and unbelieving, and the abominable, and murderers, and whoremongers, and sorcerers, and idolaters, and all LIARS, shall have their part in the lake which burneth with fire and brimstone: which is the second death.” – Revelation 21:8