As we celebrate Thanksgiving here in America, the Holy Land of Israel is ablaze with wildfires, in what appears to be a new form of terror attacks against the Jewish State. What started as a handful of brushfires earlier this week has turned into nearly 20 wildfires burning across the Country. About 60,000 residents of Israel’s third-largest city, Haifa, have been evacuated today as the fires have come dangerously close to homes and buildings. Prime Minister Benjamin NetanYahu spoke out strongly against the perpetrators, saying that anyone implicated in these acts of terror would be punished severely. “(Arson) is a crime for all intents and purposes”, he said, “and in our opinion this is TERROR for all intents and purposes.”

This wave of wildfires is the worst that the Nation has experienced since 2010, when the single deadliest wildfire in Israel’s modern history burned for four days and claimed the lives of 42 people. The first fire was kindled late Monday night near Neve Shalom, a small community between Jerusalem and Tel Aviv. Not long after, a few more fires sprung up near Jerusalem, and in a small town near Haifa. Dozens were forced from homes, and many houses were destroyed. Yesterday, another fire in Nataf of the Jerusalem Hills damaged property. Israeli police detained 4 Palestinians in connection to the blaze. Throughout the night, firefighters battled numerous fires across the Country, most burning on the outskirts of the Holy City, Jerusalem. 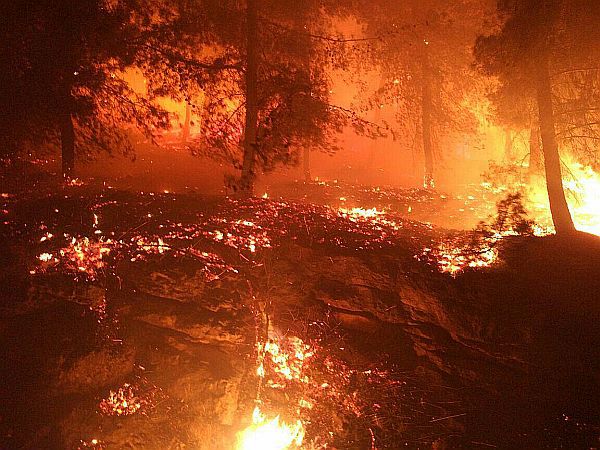 More than 130 people have been taken to the hospital with minor injuries, mainly from smoke inhalation. Highway 443, which links Jerusalem and Tel Aviv, has been temporarily closed as flames reached the city of Modi’in, which is about half way between Israel’s two-largest Cities. Today, wildfires are burning all across central and northern Israel. The wildfires in and near Haifa have been the worst. Nearly 25% of the City’s 250,000 residents have been evacuated, which Mayor Yona Yahav called unprecedented. 8 Haifa neighborhoods are threatened by 6 different fires. One fire’s flames reached 20 stories high. 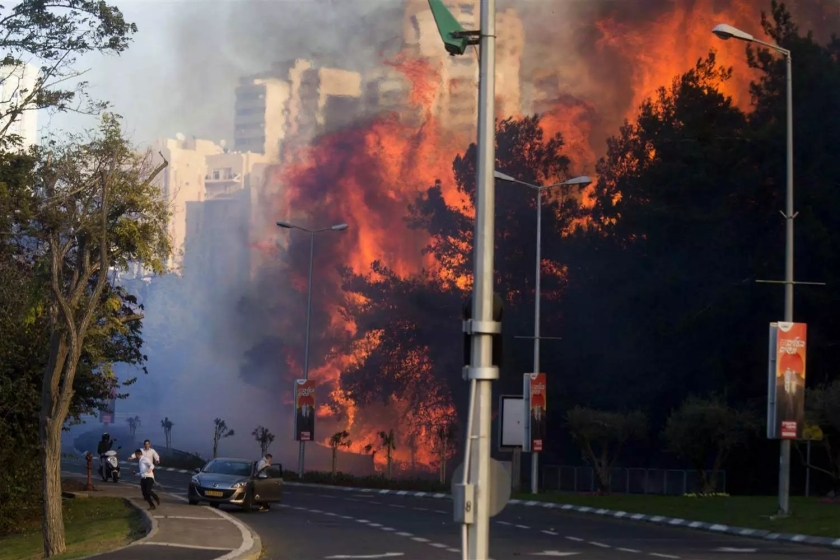 Internal Security Minister Gilad Erdan said that up to half of the fires have been concluded to be “arson terror”, and Prime Minister NetanYahu said that “incitement to arson” in Palestinian communities has lead to the rise in the number of fires. The incitement to commit acts of terror against Israel are almost always fueled by social media. The hashtags “Israel is burning” and “the Zionist entity is burning” have become the top trends on muslim social media over the past 48 hours, with many tweets and posts celebrating the fires. The Palestinian terror group Hamas and many popular Islamic clerics have posted disgusting anti-semitic statements, images and videos rejoicing about the fires. 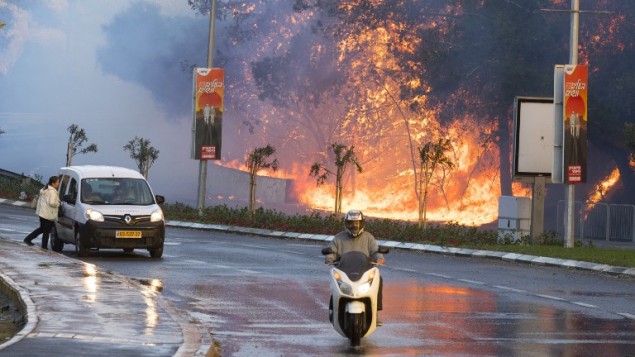 One of the absolute worst tweets said, “All of Israel’s neighbors must aid it—I suggest they send planes filled with GASOLINE and rain it down on the burning areas. I want to inhale the smell of barbecue from the Zionists.” An Egyptian news site, Almogaz, posted a meme showing one person telling another “Israel is burning,” with the other responding “Great. No one in the world can stand it.” Since the fires began to first dominate Israeli media, arson attacks increased, proving that anti-Israel Palestinians were committing copycat terror attacks. Today, a Facebook group called “the Coalition of Intifada Youths” took responsibility for the fires and called for the ongoing burning of Israel’s forests.

One Palestinian teen was caught in the act of attempted arson by students from Ohr Yeshu’a Yeshiva in the neighborhood of Neve Sha’anan. He was spotted attempting to spark another fire. The teen managed to escape, but students put out the fire before it could become a threat. After a year filled with terror attacks by Palestinians against Israelis, from stabbings to bombings to shootings, and even car rammings, it seems that they have added arson to their list of murderous methods of terror. In due time, Israel will put out the flames of these attacks, but one thing is for certain, that the fires of Hell which the Islamic arsonists will experience someday will NEVER be quenched! Their flames of torment will burn FOREVER, for vengeance is The LORD’s and He will REPAY.

“O Lord, to Thee will I cry: for the FIRE has devoured the pastures of the wilderness, and the FLAME has burned all the trees of the field.” ~ Joel 1:19

“They have said, Come, and let us cut them off from being a Nation; that the Name of ISRAEL may be NO MORE in remembrance.. they (Islamists) will be CONFOUNDED and troubled FOREVER; yea, they will be put to shame, and PERISH.” ~ Psalm 83

“Thus saith The LORD.. I will CONTEND with them that contend with ISRAEL…” ~ Isaiah 49:25

“Thus saith The LORD, What have YOU to do with ME.. O coasts of PALESTINE? Will you render ME a recompence? And IF you recompense Me, SWIFTLY and speedily will I return YOUR recompence upon your OWN head.” ~ Joel 3:4

“Thus saith The Lord GOD; Because the Philistines (PALESTINIANS) have dealt by REVENGE, and have taken vengeance with a DESPITEFUL heart, to destroy Israel for the old HATRED; Therefore thus saith The Lord GOD; Behold, I will stretch out My Hand UPON the Philistines (Palestinians).. and DESTROY the remnant of the sea coast. And I will execute great VENGEANCE upon them with FURIOUS rebukes; and they shall KNOW that I Am The LORD, when I shall lay MY Vengeance upon THEM.” ~ Ezekiel 25:15-17

“For the day of The LORD is near upon all the heathen: as YOU have done (unto ISRAEL), it shall be DONE unto you…” ~ Obadiah 1:15

“The Lord roars from Zion, and from JERUSALEM raises His Voice.. The Lord is a REFUGE to His people, a Stronghold to the men of ISRAEL.” ~ Joel 4:16