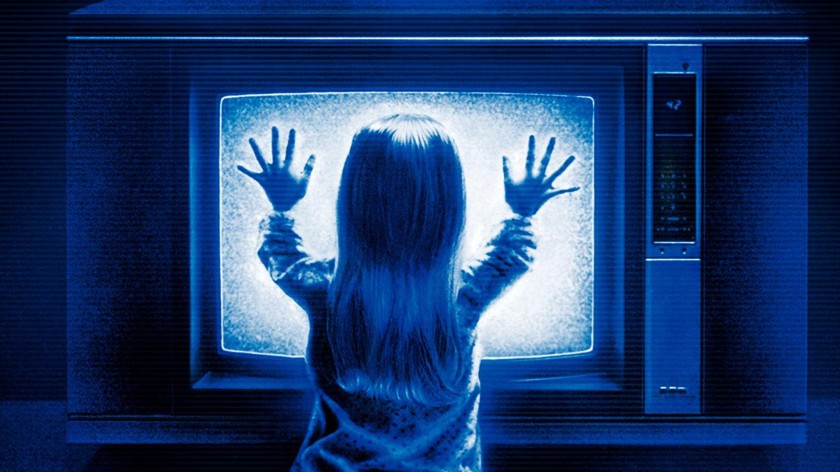 Year after year, television seems to get more and more Godless, blasphemous and downright demonic. I’ve been wanting to write about this for some time, and the recent flood of anti-Christian, pro-Satan, sin-friendly programming has finally led me to speak out. It is no secret that cable television has long promoted sin, but it’s gotten to the point that seemingly NO channel (with the exception of Christian television) is safe to watch anymore. If the program you’re watching isn’t filled with sin, then the commercials are. No doubt, the devil has taken full control of the mainstream media. Today, it is laden with sex, gore, blasphemy and ungodly indoctrination. It has gotten so bad, that I, a 35 year old man, have had to blocks certain channels on my TV to keep my eyes from looking upon images that provoke lust. Thus, I have left myself with less than 10 regularly watchable channels out of the nearly 300 channels in my cable package. I now primarily will watch only Christian channels or the news. Many would ask, why would you ever take such serious measures?

As a young single man, Christian or not, I’m prone to temptation and lust of the flesh as much as an unbeliever. Every man is. I have found that EVERY channel, with the exception of the Christian stations, airs some kind of sexual image throughout any given program. Heck, sometimes I even have to turn off the news because anchors have 3/4 of their body hanging out. God desires women to dress modest, not as extreme as the blankets like the muslim women are required to wear, but to at least cover up a majority of their skin to not lead a man to lust. Sadly, today’s Christian women dress more immodest than unbelievers do, and all men are prone to sin because of it. The devil knows this, and that is why Television today is FILLED with sexual situations. He knows that is his greatest weapon against Christian men. Lord Jesus said that if we even LOOK UPON a woman with lust in our heart, then we have committed adultery. In today’s day and age, EVERY Christian man with a TV would be guilty of this sin, myself included.

So that is why I took action over what content comes through my television. The devil and his demons can only enter into your home or life if you give them a doorway, and many do not realize that the biggest doorway into our homes is the television. Right behind the TV is our smartphones. You don’t have to personally invite Satan into your home, as NO Christian would ever want to do that. You just have to ignorantly open the door of lust, temptation, unBiblical teachings, blasphemy, and promotion of sin which ALL come through our televisions EVERY hour of EVERY day. In the next 2 months, there will actually be two new TV Series debuting that actually STAR the Devil himself, and both of them paint him in a “good” light! Bringing to mind the Biblical verse in Isaiah, which says that “Good will be called evil, and EVIL will be called GOOD.”

The new FOX drama, “Lucifer”, paints Satan as a caring, likable guy in human flesh. The character, “Lucifer Morningstar”, is supposed to make the devil look cool, driving a fancy car, owning a nightclub in LA, and he is irresistible to women. Lucifer is portrayed as a “good guy” who is bored and unhappy as the keeper of Hell. In the script, he resigns his throne, abandons his kingdom and retires to Los Angeles. God sends an Angel to “convince” Lucifer to return to the underworld. Lucifer questions the Angel, “Do you think I’m the devil because I’m inherently evil or just because dear old Dad decided I was?” The question is meant to make people rethink Biblical teachings about good and evil, and especially about God and Satan. The show is extremely spiritually dangerous to viewers, especially the youth who don’t know their Holy Bibles. In my opinion, that’s exactly who the devil is targeting through this show, and through much of television today.

As if that wasn’t bad enough, A&E will air a similar series beginning next month, entitled “Damien”, which presents the AntiChrist as another “likable” youth who doesn’t seem that inherently evil. They paint him as more good than bad in this show as well. Who else but the Devil himself would ever want to paint Satan as a “good guy” to the public?! Meanwhile, our Lord Jesus is mocked and blasphemed REGULARLY in the mainstream media. It’s disgusting. Most recently the new NBC comedy “Superstore” deeply offended Christians by suggesting that Jesus would not only “support” Gay Marriage, but that He Himself WAS “gay”! Bet NBC wouldn’t say that about Muhammad of Islam, once again proving the media’s hostile anti-Christian bias. There is an equally blasphemous show called “Black Jesus” which portrays Christ as a weed smoking, foul mouthed, gang-related african american in Compton. God help us.

Even so-called “Family friendly” networks have promoted what our Holy Bibles call “abominable sin”. The Disney Channel has incorporated openly gay characters and couples into their popular teenage shows, and ABC Family aired the first ever televised kiss between two underage boys. America’s youth are being subjected to more sex, violence, and profane language during the traditional early-evening “family hour” of broadcast television viewing than EVER before, a watchdog group has found. The Parents Television Council studied the animated TV shows ranked highest among viewers 12-17 years old, and then monitored them for about a month. The study found that, the PTC analysts viewed a total of around 125 episodes and found a total of nearly 1,500 incidents of explicit sex, drugs and/or offensive language within 57 hours of programming. I’m not even gonna get into the pop musicians influencing the kids today, who openly promote demonic imagery and spew anti-God lyrics, as that would take a whole ‘nother article.

Other recent studies have found that between the years of 2001 and 2007 sexual content rose nearly 25%, meaning between 2008 and today, it most likely rose much more. Also, about 20% percent of Americans have said that television has directly contributed to their increasing support for Gay Marriage. That brings me to the most recent media indoctrination of Americans…

This past Sunday’s Super Bowl reached about 114 MILLION viewers, and was the 3rd most-watched television program in United States HISTORY. That couldn’t be a bad thing right? It’s a football game, so it can’t be too harmless right? WRONG. During the Halftime Show’s musical performance, which is usually as popular as the Game itself, the NFL and CBS decided it would be a great place for LGBT propaganda. A writer for The Guardian said, “The whole stadium held up a RAINBOW of cards, some spelling out the words ‘Believe in Love’.. a sweet affirmation of same-sex marriage.” In another moment, the lead singer of Coldplay went up to someone in the crowd who was waving a gay pride flag. It was no doubt a public celebration of Gay Marriage and a slap in the face of traditional God-fearing Christians and Jews. 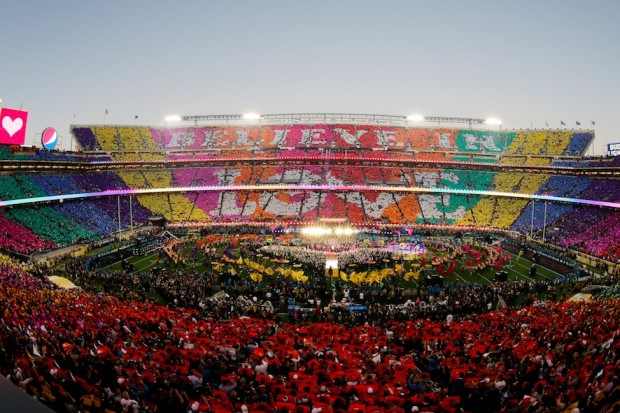 Meanwhile, whenever a Christian celebrity like Duck Dynasty’s patriarch Phil Robertson, or the Benham Brothers, make statements from the Holy Bible about what GOD says about Gay Marriage, they are immediately tarred and feathered across the media. The Media does not want opposing views, nor does the devil. They want ONE view and that is whatever Godless view they are pushing on the American people. That is why I wrote this article to WARN all of you to be careful what you watch and especially what you take to heart from your TVs. Parents especially must be more vigilant than the rest of us believers because the devil wants your CHILDREN. He is already filling their minds with lies through “common core” education in schools, and when they get home he continues his demonic indoctrination of them in your OWN HOMES. So monitor what your children are watching, and like me, even monitor what YOU are watching. Television has become the devil’s playground, and it’s time for us believers to shut him OUT, and hopefully shut him DOWN.

“But I say unto you, That whosoever LOOKS on a woman to LUST after her has committed ADULTERY with her already in his heart.” ~ Matthew 5:28

“You adulterers and adulteresses, know you not that the friendship of THE WORLD is enmity with GOD? Whosoever therefore will be a FRIEND of the world is the ENEMY of God.” ~ James 4:4

“And be NOT CONFORMED to this world: but be you transformed by the RENEWING of your mind, that you may prove what is that GOOD, and acceptable, and perfect, will of GOD.” ~ Romans 12:2

“LOVE NOT the world, NEITHER the things that are IN the world. If any man love THE WORLD, the Love of The Father is NOT in him. For ALL that is in the world, the lust of the FLESH, and the lust of the EYES, and the PRIDE of life, is NOT of The Father, but is of THE WORLD. And the world passes away, and the LUST thereof: but he that does the will of God abides FOR EVER. Little children, it is the LAST TIME: and as you have heard that antichrist shall come, even NOW are there MANY antichrists; whereby we KNOW that it is the LAST TIME.” ~ 1st John 2:15-18

“Now The (Holy) SPIRIT speaks expressly, that in the LAST times some shall DEPART from the FAITH, giving heed to SEDUCING spirits, and doctrines of DEMONS.” ~ 1st Timothy 4:1-2

“.. DENY ungodliness and worldly LUSTS, we should live soberly, righteously, and Godly, in this PRESENT WORLD.” ~ Titus 2:12

“Woe unto them that call EVIL good, and GOOD evil; that put darkness for light, and light for darkness…” ~ Isaiah 5:20

“May they RECOVER themselves out of the snare of the DEVIL, who are taken captive by him AT HIS WILL.” ~ 2nd Timothy 2:26

“SUBMIT yourselves therefore to God. RESIST the devil, and he will FLEE from you.” ~ James 4:7

“Be sober, be vigilant; because your ADVERSARY the devil, as a ROARING lion, walks about, seeking whom he may DEVOUR.” ~ 1st Peter 5:8

“They CHANGED the Truth of God into a LIE, and worshipped and served the creature MORE THAN The Creator, Who is blessed FOREVER. Amen. For THIS cause God gave them up unto VILE affections: for even their women did CHANGE the natural use into that which is AGAINST nature: And likewise also the MEN, leaving the NATURAL use of the woman, burned in their LUST one toward another; MEN WITH MEN, working that which is UNSEEMLY, and receiving IN themselves that recompence of their ERROR (S.T.D., Aids, etc.), which was fitting RETRIBUTION; And even as they did NOT LIKE to retain GOD in their knowledge, God gave them over to a REPROBATE mind, to do THOSE things which are NOT convenient.. Then there are those, Who knowing the JUDGMENT of God, that THEY which commit SUCH things are worthy of death, NOT ONLY do the same, but have PLEASURE in them that DO them.” ~ Romans 1:25-28,32

“Wherefore seeing we also are compassed about with so great a cloud of witnesses, let us LAY ASIDE every sin which does so EASILY beset us, and let us run with PATIENCE the race that is set before us, Looking unto JESUS The Author and Finisher of our Faith; Who for the joy that was set before Him ENDURED the Cross, despising the shame, and is set down at the Right Hand of the Throne of GOD.” ~ Hebrews 12:1-2