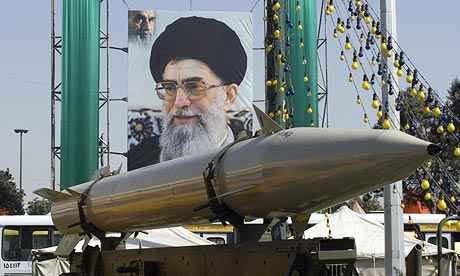 The Obama Administration has announced no change in it’s plans to lift sanctions against Iran, even though the Islamic Regime has already violated the Nuclear Deal numerous times since it was signed in July. Secretary of State John Kerry said that “Iran is fulfilling its obligations under the international agreement” in quote, “transparent and verifiable ways”. He added that “removal of sanctions is appropriate.” Nearly 40 Republican Senators disagree, urging the Obama Administration not to lift the sanctions due to numerous violations of the deal, most notably, Iran’s recent ballistic missile test.

Aside from the bold move by the Islamic Terror State to fire off the ballistic missile for the world to see just 2 months ago, they have also breached the deal many other times. They have exported weapons to Syria and Yemen, and have sent Military Generals to Russia, which they are banned to do in the Nuclear Deal. It was also recently revealed, although Obama said their nuclear stockpile of low-enriched uranium was to be gradually reduced under the Deal with world powers, the stockpile has actually INCREASED in the past 5 months.

Iran’s stockpile of uranium has increased by 460.2 kg to 8,305.6 kg, an IAEA report revealed. Under the deal, the stockpile is required to be decreased to no more than 300 kg. Also, another International Atomic Energy Agency (IAEA) report says that Iran has failed to fully cooperate with an investigation into its past nuclear weapons related work.

Yet Obama, just this week, voted in FAVOUR of Iran at the IAEA to CLOSE the book on Iran’s nuclear weapons research. Interesting timing, as Obama has called to begin to lift the sanctions on Iran by NEXT Month. I say interesting because his Administration officials, who have defended his terribly bad deal, have consistently said that Tehran would need to explain all questions about nuclear weapons-related work BEFORE any sanctions could be lifted under the Nuclear Agreement. Now, thanks to Obama’s vote to shut down any further IAEA questions about Iran’s nuclear weapons program, Iran won’t have to answer for anything.

As far as the illegal ballistic missile test is concerned, the United Nations said that the missile launch was in violation of Security Council resolution 1929. This resolution bans Iran from conducting ballistic missile tests, primarily because these guided missiles are capable of carrying nuclear weapons. An Iranian General stated after the launch, “Iran will NOT ACCEPT any restrictions on its missile program. Since the nuclear deal we have NOT STOPPED our missile tests, production and research even for a day, an hour or a second.” The world heard these televised comments, and yet, though one of Iran’s top military leaders made it clear that Iran refuses to abide by the Nuclear Deal, Obama still intends to remove the sanctions.

Iranian president Hassan Rouhani said yesterday that sanctions will be lifted in “the next week or two.” Unbelievable. When an official close to Obama was questioned not only on why the president is NOT punishing the dishonest Islamic regime for their actions, but on why he is instead seemingly REWARDING them, the official said – “The Administration is deeply concerned that the Iranians won’t implement the agreement and that they’ll walk away from the (nuclear) deal. So there is a deep reluctance on the part of the Administration to impose more sanctions for any violations.”

So, instead of letting Iran “walk away” with no deal, Obama would much rather reward them and “look the other way” while they continue to violate and breach his BAD DEAL. From the start, myself and many others who knew what deceiving snakes the Ayatollah and his regime are, warned everyone we could that Iran would break ANY DEAL. No deal is ever going to stop their quest to build the bomb which they have desired for decades to use against Israel and America. One of the leading voices against Iran’s dangerous leadership, and thus one of the biggest critics of the Nuclear Deal, is the honourable Prime Minister of Israel, Benjamin NetanYahu.

NetanYahu denounced the horrible deal immediately when he saw just how many concessions that Obama and world leaders gave the Iranians on a silver platter. He called the Deal “a historic mistake for the world.” He also said, “Iran will receive hundreds of billions of dollars with which it can fuel its terror machine and it’s expansion and aggression throughout the Middle East and across the globe.” Now, over 5 months later, it looks like NetanYahu, myself, and the Nuke Deal critics were right, and once again, Barack Hussein Obama was WRONG.

The question is though, is being wrong what Obama actually WANTED? Could very well be that he always knew and wanted to be wrong all along. Because, it sure baffles many Americans, that while Iran is blatantly breaching the Deal for the world to see, Obama is rushing to remove sanctions to begin to funnel that hundreds of billions of dollars to the mullahs. Is it possible that Obama’s BAD Deal has actually gotten WORSE? I believe so.

“.. The workers of INIQUITY speak peace to their neighbours, but MISCHIEF is in their hearts.” ~ Psalm 28:3

“For WHEN they shall say, PEACE and safety; then sudden DESTRUCTION comes upon them…” ~ 1st Thessalonians 5:3

“There is Elam (IRAN) and all her multitude round about her GRAVE, all of them slain, FALLEN by the sword, which are gone DOWN uncircumcised into the nether parts of the earth, which caused their TERROR in the land of the living; yet have they borne their SHAME with them that go DOWN to the pit (HELL).” ~ Ezekiel 32:24