On October 15th, six Christians were arrested in Pakistan as Cable TV operators in the Islamic country were raided for broadcasting Christian channels. Pakistan’s oldest Christian satellite broadcaster “Isaac TV” was censored, along with “Catholic TV”, and 9 other Church-run television stations. The shutdown of Christian programming came after the nation’s TV regulatory body declared the content illegal. On September 23rd, the Pakistan Electronic Media Regulatory Authority (PEMRA) sent a notice to all regional general managers to “STOP transmitting 11 illegal TV channels immediately.” The ban of the stations leaves Pakistan’s Christian minority with absolutely no public media presence for the first time in nearly two decades.

State-run television airs less than ONE HOUR of Christian programming throughout an entire YEAR (only on Christmas Day and Easter), despite the country’s Christian population nearing 3 million. Pakistani Catholic priest, Mushtaq Anjum, says that “the proclamation of the Good News has become illegal.” Meanwhile, much of the Islamic programming in Pakistan is laden with terrorist propaganda, which has led to the widespread persecution of the Christians.

Over 70 Christians, including many women and children, were murdered in a terror attack this past Easter, leaving nearly 350 injured. Attacks like these have unfortunately become commonplace in the world’s second largest muslim country. In the wake of the government’s crackdown on Christian stations, the founder of “Catholic TV”, Fr. Morris Jalal, said –

“We have just been trying to reach our own community who are generally ignored by other TV channels. Pakistani television only gives news coverage to Christians on special feasts, and our Bishops rarely appear on talk shows. Mob attacks on Christians go unreported. I still remember local coverage of the 2009 Gojra riots on Geo News which described it as a mere “collision” between two groups. Only the foreign media carried the real story – that an angry muslim mob murdered 10 Christians with 7 burned alive, following a ‘blasphemy allegation’.”

Archbishop Sebastian Shaw of Lahore, the city of this year’s Easter massacre, says Christians are being wrongly accused of blasphemy at a rate of about one every 2 weeks. He said, “The blasphemy law is being misused against Christians and that must stop.” Currently, a 16-year-old Christian boy faces the death penalty after he was accused of “blasphemy” by insulting Islam in a Facebook post. The boy was arrested after a photo of the Kaaba in Mecca, a holy site in Islam, appeared on his profile with a pig’s head on top. It’s unclear if the boy posted the image, was tagged in the post or liked the post.

Whether he posted it or not, it certainly does not warrant a death sentence, yet, under Pakistan’s blasphemy laws that is what he faces. It is no wonder that Pakistan is ranked #6 on the Open Doors 2016 World Watch List of the worst persecutors of Christians, and received the maximum score in the “violence” category. The Islamic country enforces some of the most severe blasphemy laws in the world, which results in the lynching and jailing of many Pakistani Christians.

What’s worse, Pakistan is far from alone in it’s all out assault on the Christian faith. North Korea, Somalia, Iraq, Syria, Afghanistan, Sudan, Iran, Eritrea, Nigeria, Egypt, China, Palestine, Saudi Arabia, and other nations have become increasingly dangerous places to profess your faith in Christ. Lord Jesus said that one of the major signs signaling the “Last Days” and His Return to earth, would be widespread hatred, persecution, and murder of his followers. Sadly, many Christians globally are experiencing the fulfillment of that Prophecy TODAY. We Christians here in America, and other nations which are safe havens for believers, must pray for our brothers and sisters in hostile lands and speak out against their persecutors. Because if we keep silent, then what they are enduring NOW could arrive at our doors TOMORROW. 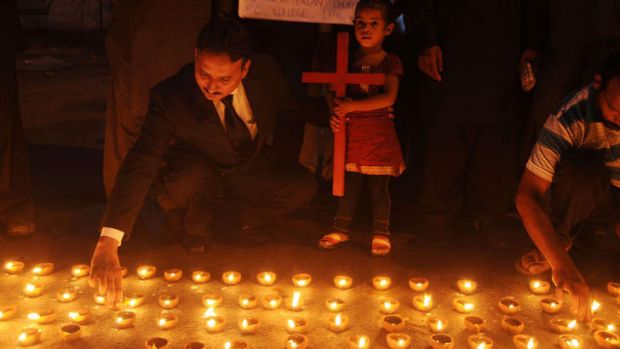 “JESUS said, Then shall they deliver you (Christians) up to BE AFFLICTED, and shall kill you: and you shall be HATED in all nations for MY Name’s Sake.” ~ Matthew 24:9

“For MANY walk, of whom I have told you OFTEN, and now tell you even WEEPING, that they are the ENEMIES of the THE CROSS of Christ.” ~ Philippians 3:18

“JESUS said, Remember the word that I said unto you, The SERVANT is not greater than his LORD. If they have PERSECUTED ME, they will also persecute YOU..” ~ John 15:20

“JESUS said, BLESSED are they which are PERSECUTED for Righteousness’ SAKE: for theirs is the KINGDOM OF HEAVEN. Blessed are YOU, when men shall REVILE you, and PERSECUTE you, and shall say ALL manner of EVIL against you falsely, for MY SAKE. Rejoice, and be exceeding glad: for GREAT is your REWARD in Heaven: for so they persecuted the PROPHETS which were before you.” ~ Matthew 5:10-12

“JESUS said.. Take HEED to yourselves: for they shall deliver you into.. PRISONS, for you shall be brought before RULERS and kings for MY SAKE, for a testimony AGAINST THEM.” ~ Mark 13:9/Luke 21:12

“… And the BEAST MADE WAR with the saints (Christians), to overcome them: and power was given him over ALL kindreds, and tongues, and nations.” ~ Revelation 13:7

“FIGHT THE GOOD FIGHT OF FAITH, lay hold on Eternal Life, whereunto you are also CALLED, and have professed a GOOD profession before MANY WITNESSES.” ~ 1st Timothy 6:12